Remembering Ruth Livingston Mills a Century After her Death

Today, October 13, 2020, marks the 100th anniversary of the death of Ruth Livingston Mills, the long-time matriarch of Staatsburgh, born in 1855.  Ruth’s legacy can be found in her descendants, the preservation of her Staatsburgh mansion, and the surrounding park that bears her name.  Upon announcing her death, The New York Times reported, “Since the death of Mrs. William Astor no leader of New York society has more nearly approached the position of social arbiter than Mrs. Mills. Her characteristics as a hostess never altered; she did not believe in easily letting down the bars to newcomers or to new methods and manners of entertaining, one critic of her small invitation list during a certain Newport season asserting that she was determined to reduce the ‘400’ to ‘150.’”

A September 12th article in a Pittsburgh newspaper reported that Mrs. Ogden Mills was due to spend the late autumn at Staatsburgh though she was currently in Paris with her daughter, the Countess of Granard. Mr. Mills was on his way to join her.  Alas, Mrs. Mills was never again going to welcome guests to her beloved Staatsburgh. 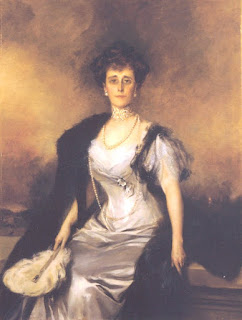 In October 1920, Ruth was in Paris staying at her home on the Rue de Varenne.  After purchasing the house in 1914, Ruth and Ogden ceased traveling across the ocean to Europe from 1915-1919 during World War I.  They offered use of their Paris home to the American Expeditionary Forces and it was occupied by General John Pershing and used as his headquarters during the war until 1919.  In March 1920 Ruth and Ogden resumed travel to Europe and traveled to England to spend time with their daughter Beatrice, now the Countess of Granard.  Ogden returned to New York during July, but again headed to Europe in September.  Ruth remained in Europe during the full spring and summer seasons.  In fact, the entire family had been abroad during the summer of 1920, but son Ogden L. Mills departed in late August and Mrs. Henry Carnegie Phipps (Gladys Mills) returned to New York with her husband and children in early October.

Ruth had been in England with her daughter Beatrice, the Countess of Granard, when she first arrived in Europe, but eventually traveled to spend time in her Paris home.  According to an article in the Brooklyn Eagle from October 15th, Mrs. Mills’ death was not expected.  She had been ill and suffered a bout of pleurisy in prior weeks, but it was believed that she had passed the critical stage and was on the mend. The day before her death she was trying on gowns from Parisian couturiers.  The morning before her death, Ruth asked her sister to run a few shopping errands for her, but when she returned Ruth had passed away.  Ruth suffered a fainting spell, which turned out to be a heart attack from which she never awakened.  Ogden was by her side when she passed.

A grief stricken Ogden accompanied Ruth’s body across the ocean on La France for the funeral and burial in New York.  Ogden departed from Le Havre, France on October 24th and according to family tradition, he filled the state room that held her casket with flowers.  The ship arrived in New York on November 2nd and Ogden was met at the pier by his son, Ogden and daughter, Gladys.  From Grand Central Terminal, a special train carried the funeral party to Hyde Park where Ruth’s funeral was held at St. James Church on November 4th.

Lady Granard did not accompany her father back to New York likely due to the fact that she had just given birth to a son named John on October 8th - a mere 5 days before losing her mother.  Her daughter's pregnancy is also a possible reason why Mrs. Mills remained in Europe during the summer season instead of returning to spend the season in Newport.  Beatrice along with her husband and children did make the ocean crossing in late November 1920 and arrived the day before Thanksgiving presumably in order to spend the holiday with Ogden and family.  The New York Tribune reported that their ultimate destination was Millbrae, California where they would spend the winter.  The Earl and Countess brought their 3 older children, but left the youngest in Ireland.

The funeral was officiated by the reverend of St. Margaret's Church in Staatsburg and the reverend of St. Thomas Church in New York City.  The St. Thomas choir provided the music for the service.  Both family and close friends attended the service including Ogden's sister, Mrs. Whitelaw Reid and Hudson Valley neighbors Frederick and Louise Vanderbilt, Mrs. William B. Dinsmore, Mr. and Mrs. Robert Huntington, and Mrs. Vincent Astor.

After the service Ruth was interned in the Morgan Lewis vault in St. James Cemetery, which is the burial place for her branch of the Livingston family.  St. James Cemetery was the resting place of Ruth’s paternal great-grandparents, grandparents, and her parents so it made sense that it would also become her the site of her burial. In 1921, Ogden commissioned a mausoleum where Ruth was ultimately laid to rest.

The mausoleum was designed by Robert Weir Schultz (1860-1951), a Scottish Arts and Crafts architect, who also developed furniture and landscape designs.  His business was headquartered in London so it seems likely Ogden met with him there since Ogden did return to Europe in 1921.  Schultz also had another connection to the family.  He was commissioned by the 3rd Marquess of Bute in 1895 to work on several properties including Dumfries House and Mount Stuart.  Decades later in 1932, Ogden's granddaughter Eileen married the future 5th Marquess of Bute and she lived at both of those properties.  The architectural plans for the mausoleum are dated 1921 and reveal an elaborate yet dignified final resting place for Ruth Livingston Mills. In the future, Ogden, and their son Ogden Livingston would also be buried inside the mausoleum alongside Ruth. 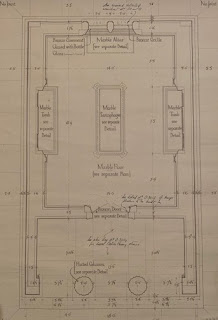 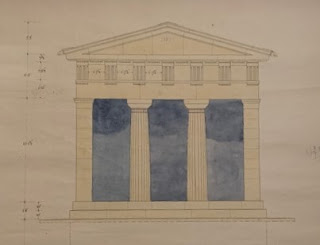 In addition to commissioning the mausoleum at St. James Cemetery, Ogden memorialized his wife with panels of stained glass windows that he acquired in France and had installed in St. Margaret’s Church in Staatsburg.  They were reported to be from Chartres and dated to the 13th-16th century.  The center panel depicts St. Peter while the side panels depict saints or noble patrons that have not been identified.

Ruth had most recently updated her will in January 1920 so all of her affairs were in order when she died.  The will contained no surprises and the contents provided for her immediate family, her sister, and several employees.  Ruth gave lifetime use of all of the properties she had inherited from her family to Ogden and then stipulated that they pass to her son Ogden Livingston upon her husband's death.  Her will ensured that Staatsburgh would pass to her son after the death of Ogden, and if Ogden Livingston died without issue (which he did), then the house would pass to her daughter Gladys. Ruth wanted the house to stay in the family, but even though it did not ultimately pass to any of her grandchildren, her spirit has remained. The décor and furnishings inside the house all reflect Ruth's tenure as matriarch and hostess of Staatsburgh.  Staatsburgh continues to interpret her life and activities a century after her death and will continue to share her privileged and interesting lifestyle with the public for years to come.

Posted by Staatsburgh State Historic Site at 8:25 AM