How Samantha Parkington Taught Me About the Past

Do the names Kirsten, Samantha and Molly ring a bell?  If they do, it is likely that you are a child of the 1980s and early 1990s...like me.  Beginning in 1986, Pleasant Company introduced these three young women who made up the American Girls Collection. Kirsten Larsen (1854) was a Swedish immigrant living on the frontier, Samantha Parkington (1904) was an orphan being raised by her grandmother, and Molly McIntire was living through World War II.  Each girl was represented by a doll, but the collection was much more than just a doll.  The story of each girl was told in a series of books which included a book about school, Christmas, her birthday, summer, and change.  Each doll had different outfits and accessories which all related to the content and illustrations in the books.  This clever marketing helped transform Pleasant Company into a multi-million dollar company re-branded American Girl after it was purchased by Mattel for $700 million in 1998.
Each of these dolls had a substantive backstory and one of the key components was their connection to history.  Everything about them was meticulously researched in order to provide young girls a new way to learn about the past.  Each book included a section at the end entitled "Peeking into the Past," which provided the historical context for various events or activities included in the book's plot.  The books and the dolls could have easily glossed over the darker side of history, but they make an attempt to address issues of class, racism, and injustice in an age-appropriate way.  As the company expanded, they added new dolls beyond the original three including a doll named Addy who was a formerly enslaved young girl living in 1864. 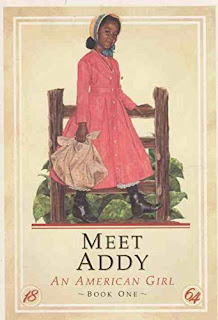 The creator of Pleasant Company, a woman named Pleasant Rowland, was inspired by a visit to Colonial Williamsburg.  She thought that young girls might become interested in history by identifying with dolls based in different historical periods.  She was right.  I was one of them.  I feel confident that my interest in history predated owning one of these dolls, but I certainly was their key market demographic during the company's early years.  It was a clever way to combine education and play.  Even in 2020, a company called Outschool which provides online learning experiences for children, uses the dolls for several different classes.  A series of 8-week courses entitled "U.S. History Through the Eyes of American Girl Dolls" explores different periods of history such as the American Revolution with Felicity and the Great Depression with Kit.
I think you can guess which one I had.  Unbeknownst to myself or my family that I would later work as a curator in a Gilded Age mansion, I was gifted Samantha Parkington as a young girl.  After several years of birthday and Christmas gifts, I ended up with quite the collection of outfits and accessories.  It is somewhat fortuitous that I find myself, about 30 years later, working at a historic site from Samantha's era. I hadn't thought about Samantha in years, but a recommendation to purchase a book of crafts inspired by the Samantha books reminded me that I still have everything.  My Samantha has been living in a wooden trunk in my childhood bedroom since the 1990s so I decided to check it out during a recent visit.
Samantha Parkington was a 9 year old orphan who lived with her well-to-do Grandmother (Grandmary) in Mount Bedford, NY (think a fictionalized Mount Kisco).  Samantha was prone to mischief and constantly struggled to live up to her Grandmary's expectations of a lady whether it be her dismal embroidery skills or her constant skinned knees and ripped clothing.  In addition, Samantha was kind to everyone and curious about the world around her beyond her small bubble of life.
The different characters in Samantha's world allow readers to cover many events and relevant topics in 1904.  For example, Samantha's uncle owned one of those newfangled automobiles and he married a woman named Cornelia who spoke at a rally for women's suffrage.  During the summer, Samantha traveled with her family to her grandmother's camp in the Adirondacks and partook in outdoor activities.
Samantha's world also includes individuals in various stations of life.  Grandmary's seamstress is a Black woman named Jessie.  When Jessie suddenly quits her job, Samantha decides to find Jessie at home and ask her what happened.  While seeking out Jessie's home, Samantha walks through a different part of town where the streets are narrower, the green space smaller, and the street lights dimmer.  She did not realize that there was a part of town where Black families were segregated and they did not really have a choice.  It turns out that Jessie had a baby and could no longer work, but Samantha convinced Grandmary to allow the baby to come to work with her.  This is perhaps more wishful revising than realistic, but it would certainly be more likely to happen in a small household with just a couple of servants and an empathetic employer.
Samantha's best friend Nellie works for the family living next door to Samantha. Nellie, who is also 9 years old, used to work in a factory in New York City, but her immigrant parents sent her to Mount Bedford where she will make more money.  Her family was having difficulty making enough money to buy food and coal.  Samantha cannot believe that Nellie had to work in a dangerous factory and has never been to school.  Samantha decided that she would teach her so she could start to learn and be able to catch up to other kids her age when she is able to attend school.  While Samantha teaches Nellie reading and arithmetic, Nellie teaches Samantha important lessons about class and poverty.  The Samantha stories cover many facets of life during 1904 and those details stuck with me and bolstered my historical knowledge base as I continued to study the past.
If thinking about dolls has you feeling nostalgic for your childhood years in the 1980s & 1990s, look no further than the September 2020 release of the newest doll to be part of the American Girl Historic Character collection.  Courtney is from 1986 and she loves playing Pac Man at the mall wearing neon clothes and a side ponytail.  Accessories include a Care Bear sleeping bag, boombox, and a caboodle for her hair accessories.  To get even more meta, Courtney even has her own American girl doll, Molly, one of the original dolls who debuted in 1986 (complete with a replica of the original Pleasant Company box, a catalogue, and the book.)  This "historic" character really lets children of the 1980s feel like their childhood is now part of history (yikes!).  Typical of American Girl marketing savviness, Courtney was released just in time for the 80s generation to buy their own children the doll for Christmas!
Posted by Staatsburgh State Historic Site at 2:01 PM