This essay is the second in a four part series about Hallowe'en during the time of World War I and the Spanish flu pandemic. The series was written by Carol Kohan who is one of Staatsburgh's wonderful volunteers. In addition, Carol enjoyed a 38 year career with the National Park Service, holding interpretation, curatorial, and management positions including Curator of Martin Van Buren National Historic Site in Kinderhook, Midwest Regional Curator in Omaha, Superintendent of Herbert Hoover National Historic Site in Iowa, and Deputy Superintendent of Roosevelt-Vanderbilt National Historic Site in Hyde Park. After her retirement from the National Park Service in 2013, Carol served two terms as Historian for the Town of Hyde Park.

In Part I, we saw how Halloween was deep-rooted in the American culture and economy during the Gilded Age through 1916. Would its prominence weaken as the nation was called to war?

On April 6, 1917 Congress declared war on Germany at President Woodrow Wilson’s behest to “make the world safe for democracy.” In addition to committing troops to fight with the Allies, the President directly addressed American citizens to ask for their participation in the war effort. The Great War would cast a long, somber shadow over the country as many Americans were sent overseas and loved ones left behind were busy with war work to support them.

Nevertheless, come October, the treasured Halloween holiday was not something that Americans were willing to give up. It just meant too much—to the children, to the debutantes, to the merchants, to the community and to the country as whole, determined to maintain normality in dark times.

Sacrifices and adjustments to the customary observances had to be made, but Halloween would be widely celebrated in 1917, albeit in more subdued or distinctive ways. If winning the war meant maintaining morale, keeping Halloween was the order of the day.

There are many reasons why Hallowe’en will be celebrated this year with more than the usual zest. Too, there will be the element of sadness, with so many “only ones” and “best particulars” absent at the various cantonments awaiting the call to active military service. The spirits of all saint’s eve will have to bestir themselves to perform all the tasks to which they will be assigned. (Evening Journal, Wilmington DE, 20 Oct 1917)

The social column in the New York Times announced that the “big private affairs” usual in New York society’s winter season would be “abandoned in favor of informal entertaining in a very quiet way and attending opera, theater and charity events.” Society across the country had decided on the “Rules of Good Form…Appropriate Entertainments for Wartime” to include “knitting bees followed by luncheon, dancing at war relief and home charity events, dancing at soldiers’ and sailors’ clubs.” (New York Times, 28 Oct 1917)

The column continued as a matter of course, “Halloween, the night of ghosts and goblins will lend a picturesque phase to the informal entertaining of the week. All of the country clubs will have some sort of celebration.”

Halloween postcards were still available and affordable at a penny a piece. Was it coincidence or intention that it was not until just after Halloween, on November 2, that postage was raised from 1 cent to 2 cents for the duration of the war? Cancellation marks such the Stars and Stripes or a reminder to “Buy Liberty Bonds” and “Back the Boys in the Trenches” were subtle patriotic additions to the holiday messages. 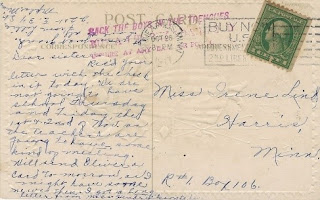 Halloween postcard postmarked 1917 with patriotic cancellation slogans. Author’s Collection
Here is an example of a Halloween greeting card being “Hooverized” or, as we might say today, “recycled” by a soldier stationed overseas with the American Expeditionary Force.  The soldier’s postage was free, however, the reply had to clear the military censor. 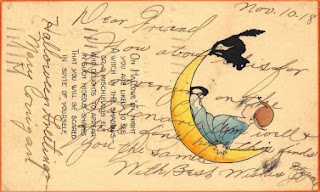 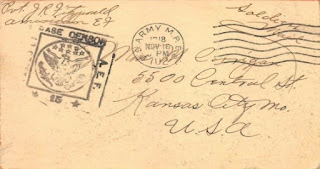 This 1918 Halloween greeting card, probably originally tucked into a letter, traveled from the USA to France and back, arriving after Halloween, but better late than never! Author’s Collection
Why Hoover? Herbert Hoover would not be president for another decade, yet his name became a household word during the war, synonymous with economizing. Soon after the declaration of war, the US Food Administration was established to manage food resources for the US troops and Allies abroad and the home front. Who better to lead the agency than Hoover, founder of the volunteer Commission for the Relief of Belgium which had provided food relief to millions of Belgian civilians facing starvation since the 1914 German invasion?

While conscription was not enacted until the Selective Service Act passed on May 18, 1917, this cartoon shows Hoover enlisting farmers, livestock, and anthropomorphic grains and produce-- including a Jack O’ Lantern pumpkin-- to do their duty for Uncle Sam.

Rather than impose rationing, the Food Administration at national and state levels strongly urged the public to cut back voluntarily on staples and take the “food pledge” to reduce consumption of milk, butter, fats and sugar, wheat and meat. “Food will win the war” and other rousing slogans were posted everywhere. Waste of any foodstuff was simply unpatriotic.

“War gardens” were also encouraged and there was even a commission for that. “Kiddie Farmers” were advised to plant their own Jack O’ Lantern and popcorn patches in June for “real, old-fashioned Hallowe’en fun” in the fall. After all, “a jolly good time is due the farmer… especially those who are planting to help Uncle Sam.” (The Evening World, NY, June 1918 )

What about Halloween parties? Could such frivolity be justified?

“Most of us are not having many parties these days, but there’s something about Hallowe’en that prevails even against war. And there you are. There will be Hallowe’en parties when there aren’t any other kind. And if we observe wartime by making sugarless and wheat substitute cakes, why I am sure Uncle Sam doesn’t care how many of them there are.” (Buffalo Times, 20 Oct 1918 )

Homemade sweets for the wartime Halloween party were to be made without cane sugar, substituting maple sugar, corn syrup or molasses in the popcorn balls, peanut brittle and taffy. Commercially produced candies and confections were still advertised for Halloween parties, but more importantly, candy could be specially packaged and sent to sweeten “your soldier’s” Halloween.

The Halloween party was hailed as the “ideal wartime entertainment” providing a “maximum of fun and relaxation at a minimum of expense.” What’s more, the most patriotic party would be the nut party-- using nuts for decorations, games and refreshments and saving the shells to be burned and used in the production of gas masks.

Another patriotic purpose of the Halloween party was to provide entertainment for the troops in camps waiting deployment. Local churches and clubs eagerly invited soldiers to attend Halloween socials. The community of Burlington, Vermont pulled out all the stops with a grand Halloween feast and frolic for the soldiers at Camp Ethan Allan. In less than two weeks, the Ladies Committee organized to bake 5000 pies “just like the ones Mother used to make” so that every soldier “had a whole pie all to himself” as well as a “rosy red Vermont apple without which no Vermont Hallowe’en would be complete.” (Burlington Free Press, 20 Oct 1917 )

With food restrictions, decorations were more than ever of “supreme importance” and were in good supply. The premier supplier of paper party goods was the Dennison Manufacturing Company based in Framingham, MA. Since 1912, they had produced an annual Bogie Book with suggestions for Halloween decorations and costumes, naturally using their own crepe paper and other distinctive products from their Halloween line.

Parents were advised to keep children’s parties to the jolly side of Halloween and avoid the gruesome and decorate with red and yellow instead of black, and witches, cats, owls, bats, goblins rather than ghosts and skulls. (Evening Journal, Wilmington DE 20 Oct 1917) 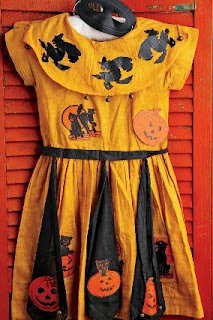 (L) Pattern for crepe paper costume, Evening Journal, Wilmington DE, 20 Oct 1917
(R) Child’s Halloween frock with paper cut-outs appliqué, 1917, Courtesy redbookmagazine.com
Halloween party attire for the 1917 season’s festivities was less frilly and more tailored than in prior years, reflecting the deep colors of autumn: nut brown, wine or beetroot red, concord blue, foliage green, and yellow pumpkin and made of cashmere or velvet with wool embroidery. And don’t forget plaid, “the refrain of every fashion melody” and a nod to the Scottish origins of the holiday. 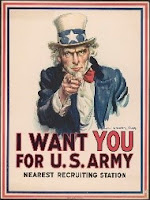 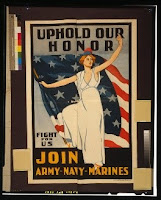 Uncle Sam had always been a popular Halloween costume character. (Did you notice him in the 1902 illustration in Part I?) Starring in wartime recruiting posters, he and Lady Liberty were favorites at masquerade parties, capturing the Liberty Bond top prizes. “Doughboy” soldiers and Red Cross nurses also figured prominently in the 1917 Halloween costume line-up. 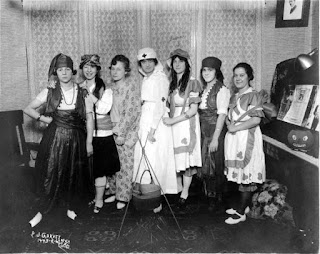 Broadway shows were a welcome diversion for many New Yorkers. A new musical comedy, Jack O’ Lantern, opened at the Globe Theater on October 16, 1917 and tickets were much in demand. Fred Stone, billed as “America’s greatest entertainer” had the starring role and thrilled audiences with his capers and stunts.

The program noted: “Every male member of the Jack O’Lantern Company has fulfilled all obligations in respect to military service.” This meant they had registered for the draft and had either not been called up or were eligible for an exemption.

The chorus girls were also doing their bit. They volunteered to knit sweaters for any soldier who sent in a photo and were overwhelmed with requests. They also requested that anyone wishing to send them flowers should “stay their hand” and send the money instead to the Company’s treasurer “for comfort kits for soldiers.” (The Sun, New York 30 Oct 1917)

Jack O’ Lantern was one of Broadway’s greatest hits that season. It closed on June 1, 1918 after 265 performances only because Fred Stone left for a stint in Hollywood’s motion pictures.

However, If you missed the show, you could still play “Gems from Jack O’ Lantern” performed by the Victor Light Opera Company on your trusty Victrola.

Or you could enjoy the lively Jack O’Lantern Foxtrot, as played here on an Edison Blue Amberol cylinder.
Truly, there was nothing better to cast away “dull care” or the worries of wartime, than to celebrate Halloween as merrily as possible!
Posted by Staatsburgh State Historic Site at 10:56 AM