This essay begins a four part series about Hallowe'en during the time of World War I and the Spanish flu pandemic.  The series is written by Carol Kohan who is one of Staatsburgh's wonderful volunteers.  Carol has presented enchanting Gilded Age Hallowe’en Tea & Talk programs at Staatsburgh since 2016.  In addition, Carol enjoyed a 38-year career with the National Park Service, holding interpretation, curatorial, and management positions including Curator of Martin Van Buren National Historic Site in Kinderhook, Midwest Regional Curator in Omaha, Superintendent of Herbert Hoover National Historic Site in Iowa, and Deputy Superintendent of Roosevelt-Vanderbilt National Historic Site in Hyde Park.  After her retirement from the National Park Service in 2013, Carol served two terms as Historian for the Town of Hyde Park.
We hope you will enjoy this four-part blog post which continues the story of this spellbinding holiday.

In the Gilded Age and well into the 20th century, Halloween was celebrated in America with a passion. From ancient origins in Celtic lands, the traditions of the harvest-end festival were brought to the United States in the mid-19th Century by Scottish, Irish and English immigrants.

By the 1890s, Halloween had captured the hearts and imaginations of Americans from coast to coast, in cities, towns and countryside. Regardless of social standing, young and old alike embraced Halloween merry-making in many forms. 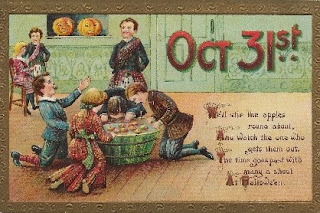 Various industries and businesses developed unique products contributing to the commercialization and spread of the holiday. Halloween postcards printed in Germany, England and the U.S. were an inexpensive way to send cheery (or scary) greetings to friends and loved ones across the miles, or invite them to a party next door. 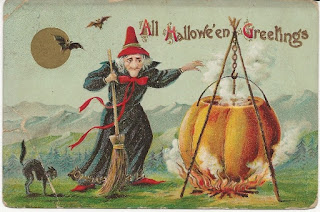 The savvy hostess could consult special Halloween guidebooks to plan her party if the array of newspaper and magazine articles was not sufficient to provide ideas for a unique presentation. Decorations and novelties were essential to transform the home or hall into a vision of jollity and mystery, with a good measure of the grotesque. Jack O’ Lantern pumpkins, witches, ghosts, black cats, owls and bats were the most usual themes with elves, sprites, devils or skeletons making appearances.


Nuts and apples were requisite for refreshments as well as for the Halloween games that would be played as had been done for generations. Young ladies were especially fond of the rituals portending romance. As family and friends gathered together on Halloween night, pumpkins would be carved, apples bobbed for, fortunes told, and ghost stories whispered in flickering firelight. 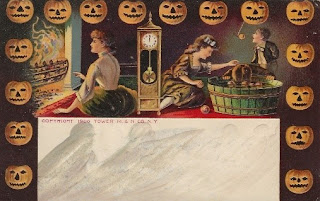 Halloween menus ran the gamut from cider and doughnuts to Lobster Newburg, all served in whimsical ways. Candy was essential, whether homemade or store-bought, and packed in fanciful figural containers. 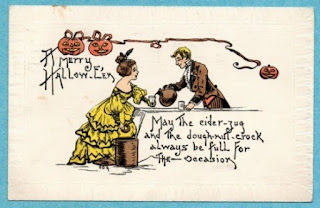 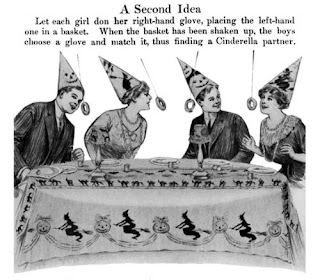 The centerpiece of the table would be a cleverly decorated Halloween cake (likely a sinfully rich chocolate Devil’s Food) with fortune-telling trinkets baked inside. Who will be married? Who will remain a spinster? Who will be rich? 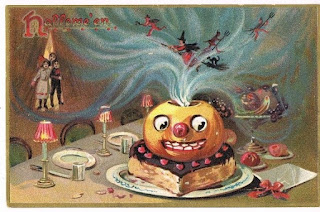 “And music, there must be music” at the Halloween party! A Victrola record player was what you needed to listen to a violin’s ghostly strains or dance a waltz or foxtrot. 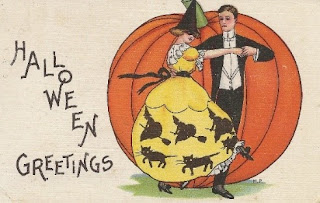 There was not yet “trick-or-treat” as we know it, however children paraded in the streets wearing false face masks and costumes on their way to parties. Little witches, goblins and clowns carried hollowed-out pumpkins or figural papier-mâché lanterns to guide them.

Mischievous boys played pranks-- stealing gates, ringing doorbells, soaping windows, or throwing bags of flour at passers-by. These antics increasingly became a nuisance but were part of the holiday, anticipated with glee by the perpetrators while dreaded by property owners and local authorities.

For the country club set, Halloween was the official start of the winter social season. Elegant Halloween gowns for the autumn dances were in white or soft pastels, made of satin or chiffon, with tulle or gold and silver net trimmings.

With Halloween such an integral part of American culture, I wondered how its observance might have been impacted by World War I and the ensuing influenza pandemic. Would the holiday continue to be celebrated, or would it be cast aside?

The First World War erupted in Europe between the Allied Powers (Great Britain, France, Italy, Russia, Japan) and the Central Powers (Germany, Austria-Hungary, Ottoman Empire) in the summer of 1914. The continent was ravaged for three years before the US entered the fight in April 1917.

From 1914 to 1916, the specter of war loomed large, but it was too distant to interfere with traditional American Halloween celebrations:

The candy shop windows in Fifth Avenue have been filled for days with black witches and grinning pumpkin faces, and there is hardly a girl in the social ranks who will not join in a jolly gathering …and at the stroke of midnight gaze into a mirror in the pale candle light in search of a fleeting glimpse of her Prince Charming, beside which the issue of battles and the fate of Kings fall into comparative insignificance. (New York Times, 25 Oct 1914) 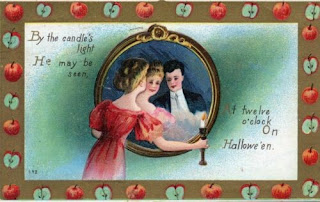 New York Society gave the customary Halloween entertainments at Tuxedo, Lenox, country places on Long Island, in Westchester County and in city homes. Yet, the devastation abroad could not be ignored, and New York was “doing its share” to raise funds for war relief in Europe. If Halloween parties could be used to aid in this effort, so much the better. Mrs. William R. Grace’s Halloween entertainment at her Great Neck, Long Island country place would be a benefit for the “relief of Belgian war sufferers… and many of the younger set, dressed as witches, fairies, ghosts, goblins etc. will sell Halloween novelties and favors.” (New York Times, 31 October 1914)

What was a Halloween party without novelties and favors? Unheard of! But most of these were imported from Germany—what to do? In 1915, the Loft Stores in New York City advertised “Halloween Novelties in Profusion and Abundance! No War Prices Either!” How were they able to do that? Backed by the “Power of American Gold,” Loft dispatched their own messenger to Europe bypassing importers, a long wait and high prices to get the goods to American consumers. In 1916, Loft was still “fortunate enough to have many of the cleverest German and Japanese novelties.”

“Call it grit, enterprise, or what you will,” Halloween would be jolly as ever in America--for now.

Note: Halloween postcards c. 1906-1916 are from the author’s collection unless otherwise noted.
Posted by Staatsburgh State Historic Site at 1:35 PM