After we discovered that the grandiose portrait of Mrs. Mills currently hanging in her boudoir was painted by François Flameng (and not François Glamony...see previous blog), we wanted to learn everything that we could about this French artist and his place in the art world. What kind of artist was he and how did he end up in New York painting scores of wealthy society ladies?


François Flameng (1856-1923) was born in Paris into a household that celebrated art and so it is unsurprising that he also became an artist.  His father, Leopold Flameng (1831-1911), was a celebrated artist who was a medalist at the Exposition Universalle and a member of the Academie des Beaux-Arts and the Legion d'Honneur.  The elder Flameng was known as an engraver, but later turned primarily to etchings.  The Metropolitan Museum of Art in New York City has several of his etchings in their collections. and the New York Public Library site shows a selection of illustrations and engravings.  His influence and instruction helped cultivate his son François' own talent for painting and portraiture.  Together they would travel throughout Europe to view and study great art collections across the continent.


Flameng (the younger) first attracted attention to his work when he was 23 and he became known at the Paris Salon winning the "Prix de Salon."  During the early part of his career, he painted mainly historical scenes and focused quite a bit on the military history of France.  Napoleon was a frequent subject of these early works and below we see an example of one of these works.


Because of the success of these early pieces, he got the commission to paint six panels at the Sorbonne, which many consider that to be his best work.  This suite of paintings illustrate Cardinal Richelieu laying the first stone of the Sorbonne.   He also painted mural style panels at the Opera Comique, which were also some of his most highly praised work along with the Sorbonne murals. 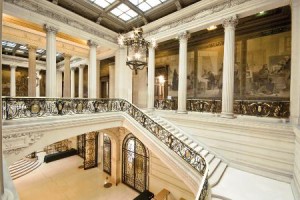 As Flameng grew older, his career veered into portraiture.  He was born the same year as John Singer Sargent, the leading portraitist of the day, and they were associates, but very little is known about their relationship.  Sargent spent his youth in Europe and was frequently in Paris where Flameng lived.  We do know that Sargent painted  Flameng in 1880 when they were 24.  Flameng is in the foreground of the painting, and fellow artist Paul Helleu is depicted in profile behind him.  Helleu studied art with Sargent and was frequently a model for him.  The painting was included in an exhibition at the Metropolitan Museum in 2015 entitled "Sargent: Portraits of Artists and Friends" and was recently purchased by a private collector for $1.3 million.  The painting was auctioned by Christie's and they surmised that Flameng may have met Sargent through the sculptor August Rodin.  Sargent gifted this painting to Flameng along with a Venetian landscape Venise par temps gris (circa 1882, private collection) so at the very least, the two had a collegial relationship.


Perhaps Sargent's success in portraiture helped influence the direction of Flameng's career because Flameng spent many years focusing on painting portraits of beautiful women.  He was commissioned to paint many wealthy women and royalty all throughout Europe.  He often traveled to the United States to complete portraits of wealthy Gilded Age women.  He never charged less than $5,000 for a portrait and some full lengths ones were said to cost up to $100,000.  He was able to earn a very comfortable living by painting European royalty and American society women.

One news publication referred to him (and other artists like him) of merely being a puppet of dressmaker and milliners.  This comment was meant to knock his artistic merit, but certainly the fashions of his subjects did play an important role in these portraits. Wardrobe was very important to these society women, and so it was naturally a strong element of the essence of the women that he captured in these portraits.  The background of Flameng's portraits was generally nondescript, and the clothing was always very dominant in the painting.


In 1908, the year before he painted Ruth Mills, Flameng painted Queen Alexandra, the reigning Queen of England, the wife of King Edward VII.  The style and pose of the Queen Alexandra painting and the Ruth Mills painting do resemble each other.  Ruth certainly emulated royalty through the interior decorating style of her homes and her love of tiaras.  Flameng also painted multiple members of the Russian royal family.  The fact that he painted royalty was likely a draw to many of his clients requesting portraits.


During the winter of 1909, Flameng traveled to New York to spend the winter and complete many commissions.  In addition to the portrait of Ruth Mills, he also painted Mrs. William K. Vanderbilt, Mrs. William D. Sloane, Mrs. William B. Dinsmore, and Mrs. Oliver Gould Jennings among others,  Later that year he exhibited the portrait of Mrs. Oliver Gould Jennings at the Salon des Artistes Française in Paris and it was hailed by critics according to a piece in the New York Herald.  Flameng occupied a studio on West 57th St. to paint his American commissions.  He repeated the trip in 1910, and in 1911 also went to Chicago to paint several women living in that city.

While he painted many portraits during the later years of his career, he also returned to military scenes and was famous for his romanticized paintings of World War I. He also gained recognition for having designed France's first bank notes. Flameng passed away in 1923 at the age of 66 and was remembered as an interpreter of beauty because of all the women he painted. His work as an artist who interpreted beauty will always be remembered at Staatsburgh through his portrait of Mrs. Mills, which showcases his ability to create in two dimensions a beautiful picture and the strong presence of a three dimensional woman.

Posted by Staatsburgh State Historic Site at 8:52 AM