Recently the site was contacted by an intern in the Heritage Department of the French jeweler, Boucheron, a renowned company that has been supplying the wealthy and fabulous with jewelry since 1893.  He wanted to learn a bit more about the Mills family because he had been scouring the sales archives and noticed that they were very regular clients of Boucheron for over 30 years from the 1890s to 1920s.  They purchased jewelry pieces monthly that were delivered to them in London, Paris, and New York.

Jewelry has always been utilized as a status symbol and this was certainly true during the Gilded Age when unprecedented wealth and the desire to stand out in society created a market for fine jewelry.  Women like Ruth Mills wore jeweled tiaras, brooches, bracelets and necklaces to society events and balls.  Rare gems and large diamonds worth millions of dollars highlighted the wealth and social status of the women they adorned.  We can compare it to the red carpet at the Oscars in the present day when "Hollywood royalty" parade past the press wearing fancy gowns and jewelry worth millions and millions of dollars.

Through this connection, we were able to receive photos of some of the actual pieces that Ogden Mills purchased from Boucheron.  Since Staatsburgh does not have personal affects from the family, this provided a wonderful opportunity to look at actual pieces of jewelry Ruth Mills and her daughters would have worn in society.

The above brooch was ordered by Ruth Mills in 1904 and she provided some of the diamonds and the 2 pearls that hang off the brooch.  Many families had precious stones and gems that stayed in the family and each generation would create new pieces that would use the same jewels hence the term "family jewels".  This was common for jewelry that was a special order by the family and not ready made pieces that were already on display in the showroom.

Ogden purchased the above tiara on April 19, 1920, approximately six months before Ruth's death so it is possible that the tiara was purchased for her, but it may have been for one of their daughters.  Ruth was known to wear tiaras frequently to fancy dinners and balls.  In addition to the four pearls prominently displayed on the tiara, there are over 500 diamonds in the piece.  Boucheron noted that utilizing the pearls in the tiara was not the traditional Boucheron style, but was done because this was a special order.

Although today the opposite is true, when this tiara was created, pearls were considered more valuable than diamonds.   After the Empress Eugenie of France wore the above tiara, many women also desired pearl tiaras though few matched the luxury and value of this extravagant tiara.  Natural pearls were the most luxurious jewels one could have in this era and were a definite status symbol. Pearls have always been formed within the shell of an oyster, but today there is a way to force oysters to produce pearls, which are referred to as cultured pearls.   In the early 1900s, a Japanese man named Mikimodo Kokicki discovered the method to entice oysters to produce pearls, which forever changed their value.  Cultured pearls (as opposed to natural pearls) began to be harvested commercially in the 1920s.  Before this process, pearls were much fewer in number and it was very rare to find a pearl that was spontaneously created and appeared naturally.  Jewelry during the Gilded Age only contained natural pearls of great value.

This Art Deco style bracelet was purchased by Ogden in 1925. Ruth had already passed away by this point so it was possibly purchased for one of his daughters.  The bracelet was made with enamel, diamonds, and colored stones.  It is currently owned by Siegelson in  New York and the Siegelson website showcases the dynamic color photograph of the bracelet seen below. 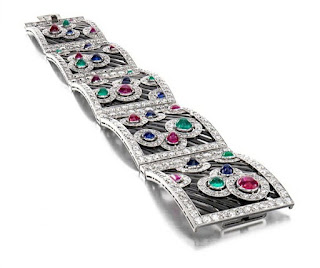 In 1928, Ogden, long interested in horses and horse racing, owned a horse that was victorious at the Grand Prix de Paris horse race at Longchamp.  The Grand Prix de Paris was a 1.5 mile horse race for three year old horses than began in 1863 and is still run today.  Ogden's horse was named "Cri de Guerre" or War Cry and won the race by three-quarters of a length.

This victory inspired him to order these horse brooches (one large and two small) from Boucheron in 1928.  Each brooch had gold, diamonds, rubies, enamel, and was inscribed "Cri de Guerre" and "Grand Prix 1928".

Although the Ogden Mills family purchased countless pieces of jewelry from Boucheron, the pieces shown above are the only photos of that jewelry that remain in the Boucheron archives. The family also purchased pieces from Cartier and Tiffany & Co. to build an extensive collection.  Ruth passed on her love of jewelry to her daughter Beatrice who became Lady Granard after her marriage to the Earl of Granard in 1909.  In 1932, she purchased a large diamond and emerald necklace from Cartier.  Its brilliance was recently on display at the Denver Art Museum.  Jewelry is timeless and thankfully easier to preserve than fabrics or textiles.  These pieces are a tangible representation of the immense wealth elite Gilded Age families held and a way for them to visually proclaim their status.