The Relationship between the Mills Family and St. Margaret's Church

When approaching Staatsburgh from the south, it is nearly impossible to miss the beautiful stone church in the center of the village of Staatsburg*.  St. Margaret's Episcopal Church has been an important feature of the village since it was built in 1891 and the parish was an important part of the community even before the current church was built.  Although Ruth and Ogden Mills were not full time residents of the village and permanent fixtures at Sunday services, generations of the family have been involved with the congregation in many ways.

The history of the church dates many years prior to the current structure and Ruth's aunt and grandmother played an important role.  The congregation at St. James Church in Hyde Park began in 1811 and pre-dates St. Margaret's Church, but the origins of St. Margaret's date back to the 1840s when the pastor from St. James began to hold an evening service at the home of Staatsburg's postmaster.  When the numbers grew, services were relocated to the waiting room of the Staatsburg railroad station.  Eventually Staatsburg residents decided that the congregation needed an actual structure.  Led by Mrs. Lydig Hoyt (Ruth's aunt) and her mother, Mrs. Margaret Lewis Livingston (Ruth's grandmother), the first church was built in 1858.  Prior to the mission church, the family had a relationship with St. James Church and the family burial plot is in the St. James Cemetery.  Ruth and Ogden are buried there along with her parents, grandparents, and great-grandparents.

The congregation continued to grow and soon it became too much for the pastor from Hyde Park to oversee.  He appointed a curate in charge for Staatsburg, and in 1885 a rectory was built on land donated by a villager.  The rectory still stands today as a private residence on the corner of High Street and East Elm Avenue.  The construction of the rectory was financed by Maturin Livingston (Ruth's father and Margaret's son).  What was first a mission church, now became an individual parish.  Maturin Livingston was elected a warden of the parish and other local residents were named church vestrymen.


By the next decade, the parish had outgrown their original building and the construction of a new church was planned.  The architect of the new church was British born architect Richard Mitchell Upjohn (1828-1903) who was known for his ecclesiastical designs.  Other notable buildings that he designed include St. Luke's Church in Clermont, NY and the Connecticut State Capitol in Hartford, CT. Upjohn's father, Richard Upjohn (1802-1878), helped to train his son and was also a very well known architect whose designs include Trinity Church in Manhattan and Lindenwald, Martin Van Buren's home in Kinderhook, NY.  The New York Bishop, Henry Codman Potter, laid the cornerstone on May 27, 1891 and the parish was incorporated and named St. Margaret's after St. Margaret of Antioch, a late 3rd and early 4th century saint from the area that is modern day Turkey.  It has been thought that St. Margaret was also chosen in honor of the church's early patroness, Margaret Livingston Lewis.

The Mills and their neighbors to the immediate north, the Dinsmore family, were early supporters of the church.  The church's large distinctive tower was funded by the Dinsmores.  The first wedding held at the church was June 1, 1892 between Robert Huntington and Helen Dinsmore.  In 1907, Ruth and Ogden's daughter Gladys married Henry Carnegie Phipps at the church.  (For more information about her wedding, read a previous blog essay HERE).

Because the church was so close to their estate, the Mills family had a close relationship with it.  Ogden Mills was a vestryman in 1899 and again from 1901-1928.  He was succeeded by his son, Ogden Livingston Mills, who took over his father's position as a vestryman in 1929 and remained one until his death in 1937.  The week after his death in October 1937, St. Margaret's held a memorial service for him.  Because they contributed so much to the church, marble plaques were placed around the altar to commemorate the family. 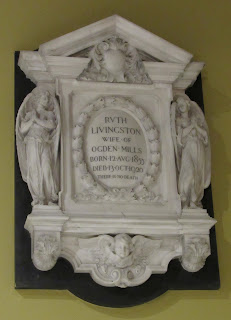 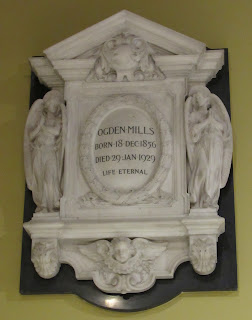 Even the Millses' servants had relationships with St. Margaret's Church.  Several attended services over the years and in 1923, a Poughkeepsie newspaper reported that the estate's gardener (and later grounds superintendent), Edward Brooks, was in charge of Easter decorations.  James Blair, grounds superintendent, was a vestryman from 1906-1924 and, J. Benjamin Wiseman, chauffeur, served a vestryman from 1931-1936.

The most obvious sign of the family's relationship is still visible today.  Ogden Mills made a major contribution to one of St. Margaret’s most distinguishing features – beautiful stained glass windows dating from the 13th - 16th centuries.  After World War I, he brought the windows back from France and donated them to the church in 1923.  Oral tradition (Mr. Mills' chauffeur) traced the windows to Chartres Cathedral and the Church of Notre Dame de Brou, but this cannot be verified.  There are two sets of three-paned windows which portray different saints.  On the right hand set, there is an inscription for his then deceased wife that that reads "In Memoriam Ruth Livingston Mills.  This panel has St. Peter in the center flanked by unidentified saints or noble patrons.

On the left, there is an inscription presumably for his mother-in-law that reads, "In Memoriam Ruth Livingston."  This panel includes (from left to right), St. Paul, St. Bartholomew, and St. Peter.  The panels with the blue and red glass appear to be significantly older than the two panels with the predominantly yellow border. 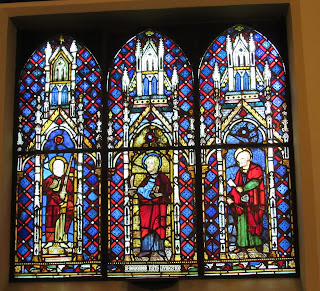 Another gift to the church was made by Ruth's sister, Mrs. George Cavendish-Bentinck, who financed and donated a Chapman tracker pipe organ that is still in use.  She also donated the beautiful Tiffany window featured behind the organ.  Even though she lived in England, Mrs. Bentinck frequently visited Staatsburgh and continued to visit after her sister's death.  It is likely that she would have attended the church during her visits.


St. Margaret's Church remains an important part of the village of Staatsburg and continues offering weekly services.  Even if you are not Episcopalian or a church goer, it is still possible to view these beautiful, vibrant windows and the church interior.  Saint Margaret's will be open for tours the first Sunday of the month from 12-3pm through October.  Upcoming dates include: July 2, August 6, September 3, and October 1, 2017. The tours should last around 20 minutes - call 845-889-4181 for more information.


*Staatsburgh, the mansion, is spelled with an 'h', while Staatsburg, the village, does not have an 'h'.  The village dropped the 'h' in 1890 as the result of the U.S. Board of Geographic Names standardization program.
Posted by Staatsburgh State Historic Site at 4:33 PM