When Ice Came from the River: Ice Harvesting in Staatsburg

Before the invention of electric refrigeration, how did food and perishables keep cold, especially during the warm summer months?  The answer is ice.  Large blocks of ice cut from a river or lake during the winter would keep food items cool all summer.  But how did the ice move from the river into the home?  To answer that question, we must take a look at the ice harvesting industry, which was active throughout much of the north-east coast of the country (as well as inland, in northern states) between the 1830s and 1920s, and which was dominated for several decades by production on the Hudson River and nearby lakes.

Although the village of Staatsburg is a quiet hamlet today, it was once a bustling hub of the ice harvesting industry.  Ice was a very valuable natural resource, but it was not free, since an impressive amount of infrastructure and investment to cut and transport it to customers had to be created, along with much labor, by both men and horses. In the nineteenth century, as cities grew in size and population, the demand for ice to preserve food and cool people in warm weather grew tremendously, as urban populations did not have immediate access to frozen ponds and the river.  Hamlets and towns along the Hudson developed a robust trade to supply the demand downriver in New York City, and export shipping of ice to other, farther-flung locations. Another significant consumer of ice was the brewing industry, which used ice in regulating the temperature of fermentation so that beer could be made year-round rather than in a limited number of months.  As the meat-packing industry grew, it too consumed large quantities of harvested ice.

Some households had the luxury of filling their ice house with ice from a lake or creek on their own property, but others did not have the same resources and had to purchase ice. Now extinct except for nostalgic demonstrations, the ice harvesting industry was a major economic industry in the Hudson Valley during the Gilded Age.

Producing and storing ice had been practiced since ancient times in Asia and other parts of the world, by controlling evaporation, but in America, the impetus for a fast-growing ice harvesting industry, drawing on naturally-produced ice in cold weather, is credited to Frederick Tudor of Boston who between 1805 and 1836, developed technical advances that made ice harvesting and storage profitable, and promoted and developed a market for ice. Through tireless experimentation, Tudor reduced loss from ice melt in storage from 66 to 8 percent, and created markets for shipping his product to southern states and the Caribbean. His employee, Nathaniel Wyeth, patented the horse-drawn ice cutter which was the first tool to cut even-sided, regular blocks of ice. Before his invention, ice was hacked out in irregular chunks, which led to much loss from melt and inefficient shipping and storage. Wyeth's innovation made possible a viable ice industry.

Another premier site for ice production was Rockland Lake, approximately 30 miles north of New York City on the Hudson River's western shore, and 150 feet above ground level (now the location of Rockland Lake State Park). Here, beginning in 1831, the pure frozen lake water was transported with the aid of gravity, down to the river for shipping to the city, and a steam-driven inclined railway for its transport was completed by 1860. Improved machinery to replace human and horse power continued to be developed throughout the age of ice harvesting. 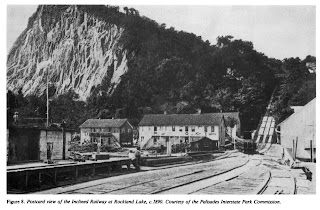 Despite rapid expansion, the Hudson Valley ice harvesting trade was consistently outrun by the  increase in demand for ice, as populations grew, cities expanded, and industries to feed people increased. Complicating things further, ice harvesting was dependent on the weather, and, as a reporter on the trade in 1880 described, "...in not more than two out of three years is the crop a fair one."  An ill-timed week of warmer temperatures or a rain storm could dramatically reduce the ice yield.

To meet consumer demand and surmount the vagaries of weather, inventors were keenly focused on developing efficient artificial ice production and refrigeration. In its heydays--between 1840-1920, however, the Hudson Valley ice harvesting trade employed up to 20,000 men (and a thousand horses) during the intense weeks of cutting and storing the cold-dependent commodity. Ancillary industries sprung up along the river: barges and ships designed specifically for ice transport, enormous ice houses, ice tool businesses, stables, boarding houses for workers and fields to grow the insulating hay and timber for dunnage (material used to keep cargo in position in a ship's hold).

From approximately 1840 to 1920, ice was harvested from the Hudson River, particularly north of Poughkeepsie. The ice near New York City was not used because, as an estuary, it contained too much salt, which would result in ice that resisted freezing and melted more quickly than the ice from freshwater further north.  There were several mergers and buy-outs amongst the various ice companies, so the leading names change, but the Knickerbocker Ice Company became the largest and most dominant one along the Hudson for many years. A competing company in the mid-1860s, the New York Ice Company, had 25,000 tons of ice in an icehouse in Stratsburg [sic] in 1866; the two companies merged the next year.

Ice harvesting began in January and on average continued for about six to eight weeks or until the ice houses were filled. The harvesting season was very limited and ice had to be at least six inches thick to be cut, since melting would have occurred in storage and transit; conversely, blocks too large were unmanageable for workers to transport. Men accompanied by horses, and later aided by steam-driven mechanical devices, often worked ten hours a day and seven days a week harvesting and storing ice. In January 1895, the Poughkeepsie Eagle-News reported that many pack peddlers abandoned their routes to work at ice harvesting. Residents of the mid-Hudson Valley who made bricks or farmed in the warmer months, found good employment in the winter harvesting of ice, while other workers handled the shipping of stored ice to markets in the fall, summer and spring.

The process of harvesting ice from the river involved clearing snow or dirt from the surface with horse drawn plows, and sometimes planing the surface.  The area was measured and then scored into a grid by a horse-drawn "marker," resembling a plow.  Another tool (Wyeth's ice plow, or a derivative of his invention) then cut blocks free. The long lengths of ice were then floated toward the shore in an open water channel. Once they neared the ice house on shore, a final cut was made with a 4 or 5 foot-long handheld saw.  The ice was moved into the ice house by a horse-drawn or, later, steam-powered elevator or conveyor belt. Workers used a pole to hook the floating blocks of ice and position them on the elevator.  Inside the ice house, the blocks were insulated by sawdust and hay between layers to prevent them from melting and fusing. When the demand for stored ice began from March onward, barges carrying anywhere from 400 to 1000 tons of ice would ship the ice down the river to sell.

There were at least ten private icehouses located in Staatsburg. Many companies operated in New York City, but had an ice house in Staatsburg to store ice from that section of the river including the American Ice Company, the New York Ice Company, the Mutual Benefit Company and the Knickerbocker Ice Company.  According to an article in the New York Daily Herald published February 13, 1874, the Mutual Benefit Company had an ice house at Staatsburg that held 15,000 tons of ice.  The company employed 75 men, 10 boys, 5 horses, and a steam engine to fill the ice house.  The largest ice harvesting company was the Knickerbocker Ice Company, which was based in New York City, but had ice houses all along the Hudson.  Their ice house in Staatsburg held 25,000 tons of ice and they employed over 10,000 men in the region. In 1896 they had a capacity for 1.8 millions tons of ice harvested throughout the valley, which was approximately 50% of the entire industry in New York.
In addition to commercial ice harvesting in Staatsburg, one of the most successful companies in the village produced tools for the trade. After J.H Bodenstein (1823-1875) emigrated from Germany, he settled in Staatsburg and started a blacksmith shop that made tools used for ice harvesting.  The business officially became the Staatsburg Ice Tool Works in 1868 and the family business continued for four generations. The family held approximately twenty patents for various ice harvesting and other tools including this one for an ice cutting tool.  A catalogue of their ice tools is found here.  They sold their products both across the United States and abroad. The business closed in 1984 when all of the buildings and equipment were sold by the fourth generation of the Bodenstein family.

Once ice was cut from the river and stored in the ice house, its final destination was the ice box inside individual homes and restaurants, or businesses such as breweries and food transport. After the Civil War, ice boxes became affordable for the working class, which contributed to the growth of the ice harvesting industry.
Staatsburgh (ending in h, as the Mills estate was spelled, distinguishing it from the hamlet), the country estate and 79-room mansion of the very wealthy Mills family, frequently hosted parties of houseguests for elegant weekend parties, and boasted all of the cutting-edge technology and luxurious amenities available in the Gilded Age including electricity, gravity-fed plumbing and ice-cooled culinary delicacies. With a large staff of estate and farm workers, Staatsburgh would have been able to muster the labor needed to cut and store a year-round supply of ice for its own icehouse each winter. A period photograph of the estate buildings at the river's edge suggests the location of the no longer extant icehouse: a peaked roof appears behind the double-roofed boathouse complex on the water, and to the right of the powerhouse, which generated electricity for the estate (while still standing along the riverbank, its chimney, seen in this photograph, no longer exists).  Judging from this photo, Staatsburgh's ice house was sited several yards away from the riverbank, on a fairly steep incline, which would have provided the excellent drainage needed as ice melt occurred during the year.  All ice houses  had a system of drainage at their base, along with insulated walls (often double walls) and interiors carefully-designed to reduce humidity (which promotes melt) and provide maximum insulation.  A well-designed icehouse, packed expertly, could provide ice well into the summer months.
As seen below, the ice box at Staatsburgh is quite large, meriting an entire room in the mansion's basement level, amidst the part of the house devoted to food preparation.  It bears a brass label reading, 'The Lorillard 1168 Broadway,' which identifies its maker.  Lorillard was a company than manufactured refrigeration units from 1877 until approximately 1920.  The company produced some of the most expensive iceboxes on the market which could be found in the homes of wealthy families like the Vanderbilts, Carnegies and the Mills.
The first electric refrigerator for home use was invented in 1913, but it was not until the late 1920s and several models later that the use of an electric refrigerator in the home became more common and affordable.  This rang the death knell for the ice harvesting industry.  Artificial ice was now able to keep food cold all year long and ice harvesting became a thing of the past by the 1930s. Even if artificial refrigeration had not made harvesting obsolete, the Hudson River rarely freezes long enough to produce ice of any useable thickness in current times.  For a further look into ice harvesting in the Gilded Age and Staatsburgh's ice box, enjoy the following video from Staatsburgh interpreter, Frank Pidala.
Posted by Staatsburgh State Historic Site at 10:50 AM