During summer, it is not unheard of for wealthy or even middle class families to rent a home for the season.  But could you imagine renting this house?  Well, in 1909, that is exactly what Ruth & Ogden Mills did.

One of the reasons Ruth and Ogden Mills may have decided to spend this summer in Europe was because their daughter Beatrice had married the Earl of Granard in January 1909 and was now living in Europe.  Beatrice was just beginning to entertain official political circles and certainly her mother's experience as a social hostess was most beneficial to support her learning curve.  Ruth and Ogden also made plans to visit the Earl's family estate this summer.  While he was most frequently based in London, the Earl was originally from Ireland and his ancestral home, Castle Forbes, is located in Newtownforbes in County Longford.  We know that Ruth & Ogden first visited Castle Forbes on June 8, 1909.  To commemorate the occasion, the earl gave Ogden a book entitled "The Earls of Granard."  This book is currently in the collection at Staatsburgh in the library.  Click here to watch a video that features this book. 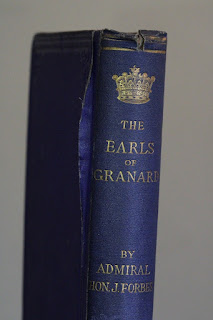 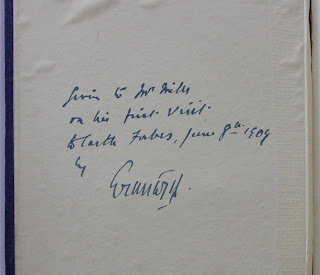 Around the time of this visit in June, the newspapers reported that the Mills had leased Knebworth House through the end of the summer.  The Boston Globe reported that Mrs. Mills found the lack of oxygen in London air very trying and so she desired a place in the country.  She planned to give large weekend parties there since the house was such a showpiece.  By August 20th, newspapers reported that Ogden Mills had ended his tenancy at Knebworth.
Knebworth House was about 35 miles north of London and has been the home of the Lytton family since 1490.  The structure went through many renovations over the centuries, but in the 1840s it was transformed into the Tutor Gothic structure that exists today.  The owner of Knebworth when the Mills leased the house was Victor Bulwer-Lytton, 2nd Earl of Lytton.  His father, Robert Bulwer-Lytton, the 1st earl of Lytton, was bestowed the title by Queen Victoria after he served as Viceroy of India. 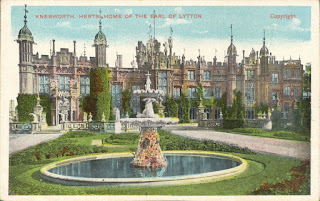 It is possible that Ruth & Ogden may have received King Edward VII while in residence at Knebworth, but we cannot be certain.  The London Evening Standard from June 14, 1909 reported that on Saturday (June 12), the King and Queen visited Hatfield and the following day "in the afternoon they motored to Knebworth Hall, the family seat of the Earl of Lytton."  If Ruth & Ogden had started occupying Knebworth by Sunday, June 13th, then it is very possible that they received a call from the King & Queen.  Bloody exciting!


Before the Mills family rented the house, Lord Strathcona, a wealthy Canadian businessman, had been the tenant.  The Lytton family did not have the money to keep up the estate in the manner required and relied on funds from millionaires renting the estate.  According to a July 21, 1909 article in The Boston Globe, "This is a great grief to Lord Lytton, who is devoted to his beautiful seat.  Had he married an heiress all would have been well, but he selected the penniless Pamela Plowden, who was the beauty of her first season."


Another reason that Ruth & Ogden might have leased Knebworth House was because Ogden's sister and her husband leased Wrest Park in Bedfordshire.  Wrest Park was a mere 18 miles away from Knebworth House and it was an easy carriage ride between the two estates. Whitelaw Reid, the American Ambassador to England, and Elisabeth Mills Reid, Ogden's sister, let Wrest Park for several summers.  They were known to have a close relationship with King Edward VII.  During the weekend of July 25, 1909, the King and Queen visited Wrest Park for a weekend party.  Ruth & Ogden Mills, and Ogden's father, D.O. Mills, were in attendance.  The photo below was taken during this weekend and includes many of those who were in attendance during the house party.

If you think Knebworth House looks familiar, you may be correct.  Perhaps you see the similarity to the exterior of Bruce Wayne's manor or you remember the Mallory Gallery that housed the Fabulous Baseball Diamond in The Great Muppet Caper.  Knebworth House has been the location for many movies over the years also including The King's Speech and Harry Potter and the Goblet of Fire.  Knebworth has even served as a stand-in for Balmoral Castle interiors in the Netflix series The Crown!  The current occupant, Henry Lytton-Cobbold, worked in the film industry in Los Angeles as a screenwriter and as a result the house and grounds have been frequently filmed.  After five centuries and nineteen generations, the house remains in the same family.  Today it is the site of rock concerts, a dinosaur trail, an adventure playground, maze, and conference center.  Check out their website to learn more about touring the estate.


*A special thank you to Jill Campbell, Knebworth House archivist, for contacting us at Staatsburgh and providing the impetus to do more research about the Mills family and their time at Knebworth House.
Posted by Staatsburgh State Historic Site at 11:29 AM