In this time of COVID-19, it is instructive to note that the world has been plagued (if you will) with epidemics throughout history. The Gilded Age was no exception. In the 19th and early 20th centuries, as in past centuries, waves of yellow fever, smallpox, cholera, diphtheria, typhoid fever, polio and scarlet fever brought fear and death. 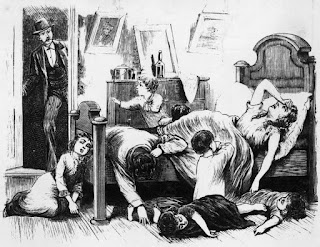 But the Gilded Age saw civilization gain ground in the fight against the scourge of deadly contagions with advances in public health policies, sanitation, and the development of vaccines for cholera (1896) and typhoid fever (1914). One of the great medical discoveries of the Gilded Age was the identification of the mosquito as the transmitter of yellow fever; mosquito eradication allowed the long-delayed completion of the Panama Canal between 1904 and 1914. Regrettably, diphtheria and polio vaccines were still decades away, as were antibiotics. Influenza, which killed nearly 50 million people worldwide in the 1918-1920 pandemic, is still a danger, as we know to our sorrow.

The fear of an epidemic at Staatsburgh was the subject of a December 12, 1901 article in the New York Times. Staatsburgh’s owner Ruth Mills, alarmed by an outbreak of scarlet fever, forbade local children to ice skate on the Hudson River just below the mansion’s sweeping lawn. The Times reported,

Staatsburg, the pretty village in which so many millionaires have their homes, is disturbed because Mrs. Ogden Mills, in her anxiety to keep any possibility of the contagion of scarlet fever away from her residence, has forbidden the young people of the village to skate on an arm of the Hudson adjacent to her home.

The sheet of water is known as Mills’ Cove. For generations the young people have been unhampered in the use of the cove for skating purposes, and rebellion is rife among them because of the attitude taken by Mrs. Mills, who claims authority over the arm of the water through an original grant issued back in King George’s days. A Grievance Committee called on Mrs. Mills, it is said, but she would not recall her manifesto. If the skating is good on Saturday the young people expect to skate on the cove as of yore, and if they are interfered with their parents promise to appeal to the courts.

Mrs. Mills has asked the Board of Education to have the books used in the public schools burned.

This looks bad…almost medieval. The feudal lord forbids youngsters the innocent pleasure of ice skating on the Hudson, citing authority over an arm of the water granted by the King…even though it’s 1901. And what’s this: “Mrs. Mills has asked the Board of Education to have the books used in the public schools burned?"  Is it a misanthropic attempt at vengeance against the youthful trespassers?

What’s behind all this? Let’s take a look.

First, although the Millses aristocratic lifestyle might have been reminiscent of feudalism, part of that lifestyle was the Millses’ sense of “noblesse oblige,” the recognition that their privileged position came with responsibility to their local community. Their support for the townspeople ranged from providing coal and food to needy families to purchasing uniforms for the village baseball team. Mrs. Mills was a village patron, not a misanthrope.

Next, remember that scarlet fever is an infectious disease, but in 1901 the knowledge that it was spread only by respiratory droplets was still in the future. Perhaps Mrs. Mills was afraid that the disease would be transmitted to the ice in the cove, the very ice that the Millses cut every winter and stored in their ice house. Might scarlet fever linger in the ice in the mansion’s iceboxes?

Concerns about the ice aside, looking with modern eyes at children congregating on Mill’s Cove during an epidemic, we might applaud Mrs. Mills’ attempt to encourage social distancing. Perhaps she was ahead of her time.

Why was Mrs. Mills so very worried about scarlet fever? How bad was it?

Scarlet fever was a particular menace to young people; it was a leading cause of child mortality in the late 19th and early 20th centuries. The development of penicillin in the 1940s finally provided a successful treatment, although a recent spike in cases suggests that a penicillin-resistant strain threatens a comeback.
Complications from scarlet fever include rheumatic fever (an inflammatory disease that can affect the heart, joints, skin, and brain), strep throat, pneumonia, meningitis, kidney damage, and sepsis. In an 1858 epidemic, when Mrs. Mills was three years old, it killed more than 2,000 people; 95% of them were children.

If we aren’t as familiar with scarlet fever as our ancestors, it’s nonetheless still a part of our literary culture. The famous novel (and subject of recent movie versions in 1994 and 2019) Little Women features Beth March, who dies from scarlet fever (as did author Louisa May Alcott’s sister Lizzie). And many of us will remember that in the children’s classic The Velveteen Rabbit, the beloved stuffed rabbit…and all the little boy’s books…must be burned when he recovers from scarlet fever.

Here our story comes full circle, as we see clearly why Mrs. Mills advocated burning schoolbooks. She was not motivated by revenge, but by the desire to prevent the spread of the disease. As a wealthy village patron, she surely planned to replace the books with new ones.

And finally, one last telling point about Mrs. Mills’ fears of scarlet fever: a Mills descendant told Staatsburgh staff that Mrs. Mills herself had scarlet fever as a child.

Turning back to the ice-skating controversy, our readers doubtlessly want to know the outcome. Was there a confrontation on Mills Cove on the following Saturday? Did the townspeople appeal to the courts? Were the schoolbooks burned? Alas, we have no further information in our archives. Our tale awaits a dedicated researcher who will find out how the story ended.