A Quick Trip to Newport

Recently on a family vacation, I made a quick detour to Newport, Rhode Island.  I have visited Newport and toured mansions on two separate occasions in the past, but both times were before I started working at Staatsburgh.  Previously I had just a general interest in the Gilded Age seaside colony, but after becoming more immersed in researching the Mills family, their servants, and the context of their life, my interests have become much more pointed.  I was eager to explore Newport as it related to the Mills family.

Though the trip was brief, I made a few integral stops and have some insights and photos that I would like to share. 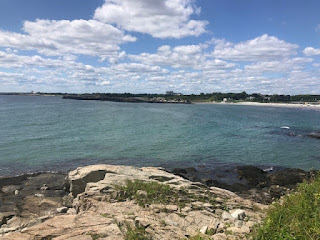 If you have been following this blog, you may remember an entry that I wrote about the marriage between a Staatsburgh footman and the butler's daughter.  Click here to read.  Or if you have visited the site, you might recall that they are featured in our new exhibit and guides often speak about them on tour.  Herbert Stride and Daisy Thompson Stride married in 1909 and then continued a career in service.  They left the Mills family and worked for many years for Emily Vanderbilt Sloane White.  Ultimately they retired to Newport, and created a foundation to fund medical education.  The Herbert and Daisy Stride Memorial Foundation was created by Herbert and the first funds were granted shortly after his death in 1970.  The foundation continues to be active today.  Because the foundation was closely associated with the Newport Hospital, portraits of Daisy and Herbert hang in the hospital lobby.  We have very few images of either individual so I was very excited to see these portraits.  Thankfully, I walked into the hospital lobby and spotted them right away.


Both portraits were painted by Thomas A. Devenish (1917-2002), who was better known as an antiques dealer, but did some painting earlier in life.  Mrs. Stride passed away in 1945 and it seems likely that both portraits were done at the same time so that dates them pre-1945 unless the portrait was done from a photograph.  A plaque in between the portraits identifies the Strides and their connection to the foundation.

My second stop on the trip was to Herbert and Daisy's home on Gibbs Avenue, which they named Eveherdee.  The name is an amalgamation of their individual names : Eve (Eveline - Daisy's mother), Her (Herbert), and Dee (Daisy).  Upon Herbert's death, the home became the property of the foundation.  The original intention of the foundation was to transform Eveherdee into an education center, but the Newport Hospital had just opened a new building with a substantial medical library.  Since there was no need to have two facilities so close to each other serving a similar purpose, Eveherdee was sold and the money was added to the foundation's funds. 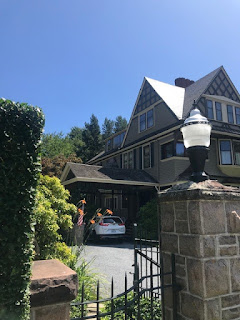 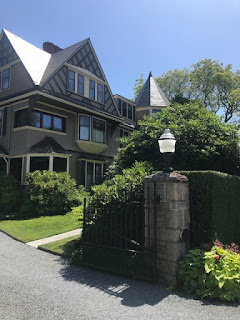 When I arrived, the gates were open and I spotted a car in the driveway with folks carrying vacuum cleaners.  The house was split into different units at one point, but the current owner has restored the house back to a single family home.  The carriage house adjacent to the main home, however, remains a separate condo.  Click here for an article about some of the recent work done at the house by the current owner and some much better photos than I could take from the street.


After visiting Eveherdee, I then decided to drop by Ocean View, the Newport home of Ruth & Ogden Mills.  I wasn't able to see in very far from the entrance on Bellevue Avenue, but I did get a feel for the neighborhood.  In addition an interpretive sign showed a photograph of the house from 2009 where it looked very similar to its appearance during the years it was owned by Ruth and Ogden.  Sadly, there was a major fire to the home in 1983, which did substantial damage especially to the upper floors.  The entire house did not burn to the ground, however, and it was rebuilt from 1984-1988.  It is visible from the Cliff Walk, but unfortunately, I did not make it there on this trip.  The Mills family sold the house in the 1930s, and it remains privately owned.


The other thing I noticed standing at the entrance to the drive into the Ocean View property was the proximity to the neighbors.  The photo below was shot after turning 180 degrees from the above photo.  The property right across the street from the Mills' home was Belcourt, which was built in 1891 for Oliver Belmont.  Designed by Richard Morris Hunt, Belcourt was both a summer getaway and bachelor pad for Belmont.  The entire first floor was built as a carriage house and stables.  By 1896, Belmont had married Alva Vanderbilt, recently divorced from William K. Vanderbilt.  Of course, Alva also owned her own mansion, Marble House, but she spent time with her husband and helped him remodel Belcourt.  Alva was a society leader and contemporary of Ruth Mills.  Some newspaper accounts have painted her as a social rival of Ruth Mills, so it was interesting to see how close they were located to each other.  In 2012, Belcourt was purchased by the founder of the jewelry company, Alex and Ani, with the intent to restore the mansion for public tours.  Though the restoration is ongoing, tours are available during the summer and fall season.


I really enjoyed my quick excursion to Newport and I certainly know that next time I visit Newport, I have several more items to check off my list and many mansions to tour!
Posted by Staatsburgh State Historic Site at 4:59 PM