One of the initial hopes for this blog was to create an avenue that showcased some of Staatsburgh's collections that are not always noticeable or highlighted on the tour. The house has so many collections that it is impossible to cover everything in a single visit.  In addition, some objects or paintings are positioned in such a way that is is hard to see them from the tour path. The "Hidden Treasures of the Collection" blog series provides a closer look at some of the interesting pieces throughout the house. 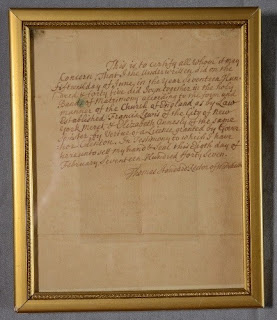 The newest entry in this series takes a look at a document that hangs on the wall in the library.  This document dates from 1745 and is the marriage certificate of Ruth Livingston Mills' great-great-grandparents, Francis Lewis and Elizabeth Annesely.  Several documents signed and written by Ruth Livingston Mills' ancestors grace the wall of the library as a way to emphasize Ruth's Livingston heritage and the history of her family at this site.  Francis Lewis signed the Declaration of Independence, which was a clear point of pride for Ruth.  It created a clear link from Ruth to the foundation of the country.

Francis Lewis was originally from Wales, and immigrated to New York as a young man.  He started to work in trade and formed a partnership with Edward Annesely.  On June 15, 1745, he married Elizabeth Annesely, the younger sister of his business partner.  To learn more about the life of Francis Lewis and his involvement with revolutionary activities, follow this link to read a biographical blog that we previously published.


How many people have their marriage certificate on the wall of their house?  How many people hung the marriage certificate of their great-great grandparents on the wall?   Probably not very many, but Ruth did...  It is not much to look at visually, but it makes a claim about the importance of Ruth’s ancestry.  What this document represented was important enough to Ruth that she displayed it even though it would be unreadable to visitors on the wall.  It requires a closer look to transcribe the document, but the document reads:


“This is to certify all whom it may concern, that the underwritten did on the fifteenth day of June, in the year Seventeen Hundred & forty five did join together in the holy Band of Matrimony according to the form and manner of the Church of England as by law Established Francis Lewis of the City of New York, Merct. & Elizabeth Annesly of the same [??]; by virtue of a license granted by Governor Clinton. In testimony to which I have here unto set my hand & seal this eighth day of February Seventeen Hundred Forty Seven.”

Sadly, Lewis outlived his wife by more than 20 years after she was captured by the British army during the Revolutionary War.  Lewis's home was targeted because he had become a strong supporter for the Revolutionary cause.  The home was destroyed and his wife was kept in poor conditions during her imprisonment.  Sadly, her health never recovered from the ordeal and she died less than two years later.

Francis and Elizabeth had three children who survived infancy, Francis, Jr., Morgan (Ruth's grandfather), and Ann.  Ironically, Francis married a woman from a Tory family and Ann married a British soldier.  Only Morgan married someone who was loyal to the Revolutionary cause.  He married Gertrude Livingston, sister of the Chancellor Robert Livingston of Clermont.  The Livingstons were another family whose home was attacked and burned by the British.  (For more information about the burning of Clermont, read this blog.)  Ultimately Morgan Lewis survived the war and purchased the land where Staatsburgh is located to build a home for his family.  When his home was burned (not by the British) in 1832, he rebuilt a larger home that was remodeled to its current state by his great-granddaughter in 1895.


Ruth kept documents showcasing her heritage on the walls of her home, but documents were not made to hang in a frame on display and face constant light exposure.  While we do want to keep the original collections on display in the house, these paper documents are especially fragile.  Many of the paper documents in the library are consistently exposed to sunlight.  If the mansion is open for tours, then the shutters are open, and the afternoon sunlight directly shines on many of these paper documents.  Recently we started a project to reproduce digitally some of these paper documents in order to rest the originals and preserve them for future generations.  It is hard to notice the difference between the original and the reprint especially when the tour path is several feet away from the document.  We can maintain the look of the house as Ruth wished while also preserving these priceless documents.

Posted by Staatsburgh State Historic Site at 11:48 AM