Life and relationships in wealthy Gilded Age society is a fascinating topic, but there are only a few first hand accounts from the women who ruled the upper echelons of society during this era.  Maverick in Mauve: The Diary of a Romantic Age by Florence Adele Sloane (a great-granddaughter of Cornelius Vanderbilt) is a published account of diary entries in the years before and during the author's marriage.  Another great example written by Sloane's cousin, Consuelo Vanderbilt Balsan, was entitled The Glitter and the Gold.  Both provide unique insights into love and marriage within a society with very strict rules.  A third example provides an equally fascinating and perhaps darker look into the lives of those who appeared to have it all.  Published in 1927 by Rita de Acosta Lydig, the book came at a time when Rita was in ill health and a lot of debt.  She wrote the book to earn money and in the meantime provided a unique window into her world.


Rita de Acosta (1875-1929) was the daughter of a Cuban refugee and in 1895, at the age of 19, married a very wealthy man over 20 years her senior.  William Earl Dodge Stokes was a wealthy real estate investor responsible for developing much of New York's Upper West Side.  The marriage was unhappy and two years after they divorced, Rita married Captain Philip Lydig who was from an old New York family.  As Mrs. Philip Lydig, Rita became very well known in society. She hosted gatherings, attended all the best social functions, and organized charity events for a variety of causes.  She was a strong supporter of women's suffrage and used her connections with wealthy friends to hold events raising money for the cause.  She also spoke out against drug addiction and poverty.  She was known for her beauty, magnetic personality, and artistic creativity.  She lived a lavish lifestyle even when she no longer had the money to do so.  With bankruptcy looming, Rita embarked on a new project and authored a book guided by author and journalist Harvey O'Higgins.


The book, entitled Tragic Mansions was published in 1927 and was part memoir and part scathing social critique.  Rita detailed what she called, "the tragic futility of fashionable life."  She provided several examples of real-life case studies after changing details to disguise their identities.  Rita wrote, "Marriage without love is the most common among our fashionable rich, and it seems to me to be the fruitful source of most of their tragedies."1  She told the story of Virginia Cort (the pseudonym Lydig gave her) who was the daughter of one of the richest men in America.  Her parents were divorced and she was married to an English peer.  The marriage didn't deter the young lord from any of his mistresses and Virginia soon imitated him as a form of revenge.  England was shocked by her many lovers, and soon her husband kicked her out and divorced her.  She was disgraced and snubbed by society so she moved to Paris to live in poverty and obscurity.  She remarried a young painter and Rita recounts that when she saw her years later, she was shocked to see how happy she was.  The scandal had not ruined her, but had saved her the tragedy of a futile life.  The story does have some similarities to the story of Alva Vanderbilt and her daughter Consuelo who married the Duke of Marlborough, and also to countless other loveless transatlantic marriages.


One of the sections of the book that stood out was the part when Rita writes about parenthood and laments the ways children were negatively impacted by a lack of love and attention from parents.  Children born into this class of wealth and privilege were often raised by governesses and nannies.  Most children only saw their parents for a short time every day and did not have a strong bond.

Yet, by all accounts, Rita was guilty of the same thing.  She had one son with her first husband.  William Dodge Stokes, Jr. was born in 1896 when Rita was only 20.  Rita never had any other children.  When she divorced her husband in 1900, the judge granted her custody of her son, but she relinquished custody to his father.  She said that she wanted him to receive all of the benefits of his father's wealth, but her sister hinted at another reason.  In her memoir, Mercedes de Acosta, Rita's sister, wrote, "When she gave birth to her son, named after his father, but called by her and my family "Weddie," she could not dissociate him from the dislike she felt for his father and never felt in any way maternal toward him."2  Newspapers later wrote that Rita "sold" her child, a claim that she maintained was false.  They said that she gave his father custody in exchange for a trust fund.  Even if this was untrue, Rita never had a close relationship with her son.  Perhaps she regretted this later in life and that is why she wrote about this type of relationship in the book.

Later in life Rita was engaged to marry a third time.  Her fiancé, the Reverend Percy Grant Stickney, was the rector of the Church of the Ascension in New York City.  They shared a passion for many of the same social causes.  However, Stickney's bishop would not allow him to marry a divorced woman.  Rita was reportedly truly in love with Rev. Stickney and was devastated when they were unable to marry.  She would not permit him to lose his position with the church.  This heartbreak, which happened just a few years before she wrote Tragic Mansions, likely contributed to her disillusionment with the fashionable lifestyle full of false and loveless relationships.  She also lamented those individuals who collected books and art just because it was expected of them.  One wealthy woman commanded her decorator to fill her house with fake books because she had no need for real books, just the look of a library.  The bookshelves were locked so no one was the wiser.

Unfortunately, today, it is not easy to access and read this book.  It seems that it was never reprinted after the initial printing in 1927.  As a result, I could not find any copies currently for sale and copies of the book exist in very few libraries.  Thanks to my New York State Library card, I was able to use their Interlibrary Loan Department and borrow one of these copies.  Perhaps in the future, the book will be digitized and available to everyone, but for those of us who are lucky enough to read it, it is a fascinating look into the lives of the Gilded Age elite and the mind of Rita de Acosta Lydig.

"The display and luxury, the appearance of success and the envy of the world, had blinded me to the real miseries of our existences."3 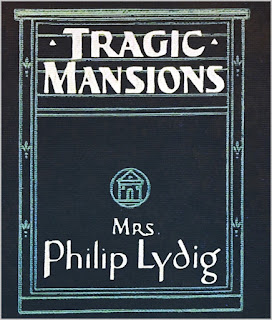