Ladies' Fashions at the Turn of the 20th Century

When Stanford White was brought in to remodel Ruth Livingston Mills’s inherited home, he took special care to install an enormous staircase, knocking out a ceiling and a couple of walls to do the job. Looking at the staircase today, you can almost see the beautiful ladies visiting Staatsburgh sweeping down those steps to make their grand entrance for dinner, no doubt bedecked in one of the most fashionable gowns they owned. 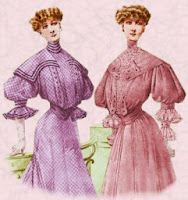 Fashion in the late nineteenth and early twentieth century was quite elaborate and just as fickle as it is today. Over the course of around twenty years (from the very late 1890’s up to around 1915) women’s fashion would undergo a veritable coup.


Dressed to the Nines

While women’s gowns had shrunk considerably since the days of the hoop skirt in the mid nineteenth century, they were still by no means functional. The earlier part of the twentieth century favored an S-bend silhouette. At that time, the ideal shape for a woman was to have a full bosom, small waist, and rounded hips. But, as we well know, few women are born with the natural gift of a body that suits the unreasonable expectations of fashion, so they needed help to achieve this shape. The dress itself would puff outward at the bust into a “pigeon chest”, helping to enlarge the bust. Skirts worn during this period were slim until the knee, where they would fan out and form a train.

However, that only covers the top layer. We must not forget that this silhouette could only be attained through a variety of undergarments. The corset at the beginning of the twentieth century took on a new shape. At the time, it was referred to as the “health corset” as it purportedly put less stress on the abdomen. It consisted of a straight front, which pushed the torso forward and the hips back. Women also had to wear a petticoat, which mirrored the cut of the dress and helped to provide structure to the skirt as well as disguising the shape of the woman’s legs.

The second decade of the twentieth century brought a leap toward modernity in the world of fashion. Under the influence of the designer Paul Poiret, women’s gowns adopted the empire silhouette, leaving the S-bend behind, like this evening gown designed by Poiret in 1910. Now, women’s fashion favored high waists and straight skirts, which were considerably more streamlined than their poufy predecessors. However, while the dresses were more streamlined the undergarments that made this new silhouette possible were by no means liberating. The corset relocated slightly, shifting its focus toward slimming the hips instead of the waistline. These new corsets began just below the bust line and sometimes ended as low as mid-thigh. Women may have been able to breathe a little easier, but they were certainly still somewhat confined by their attire.

Poiret's earlier fashions were nothing in comparison to this (thankfully) short-lived trend called the hobble skirt, another brainchild of Poiret. This dress took the slim silhouette to the extreme. The skirt itself was quite narrow, but it was compounded by the hobble garter forcing women to take dainty, mincing steps, which sometimes led to accidents and even injury. Newspapers of the period bear reports of women falling and sometimes even breaking a leg while sporting this trend.


To go along with this there was the hobble skirt’s companion: the hobble garter. This piece of clothing was created with the deliberate intent of further limiting women’s natural stride so as to “help” them walk safely in hobble skirts and avoid tearing their gowns.

Thankfully, it's all uphill from here as hemlines rose and corsets faded into disuse. And now, a whole century hence, our clothing would be almost unrecognizable to a Gilded Age woman.

Posted by Staatsburgh State Historic Site at 10:03 AM