Hidden Treasures of the Collections: Armoire

One of the reasons that we initially created this blog was to have an avenue to highlight some of Staatsburgh's collections that are not always noticeable or highlighted on the tour.  The house has so many collections that it is impossible to cover it all on a tour.  Some objects or paintings are positioned in such a way that is is hard to see them from the tour path.  The "Hidden Treasures of the Collection" blog series provides a closer look at some of the interesting pieces throughout the house.

One of the most remarkable pieces of furniture is the 19th century oak armoire in Mrs. Mills' bedroom, which is situated just between her closets.  Even though there are two closets in Mrs. Mills' room, closets were uncommon and most homes like Staatsburgh contained armoires in every bedroom to store clothing.  Read on to learn more about the armoire and the intensive efforts that went into conserving it.

This oak armoire was constructed in the upper Normandy town of Fecamp in the early 19th century.  It would have been unpainted originally and also without mirrors on the front panels.  The exposed natural oak would have been the preferred French presentation and would represent strength and resilience.  The front is carved with a variety of images including birds, plants, musical instruments, and tools.  The style of the armoire is consistent with regional characteristics from Normandy.  The shape of the door panels with a tilted circle or oval in the middle of the rail and flat sunken panels with wavering edges above and below the central carved oval is a feature of armoires from this region. The type and subject of carvings on the armoire are also characteristic of Normandy. 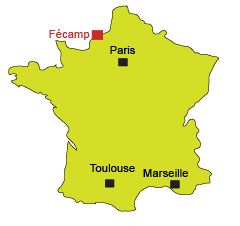 In France, an armoire of this type would have been made by the bride's family to celebrate her marriage and the hand-wrought, carved decorative scheme directly reflected the identities and hopes of the families connected through marriage.  The carvings on the armoire all have a special symbolism.  For example, at the very top of the armoire we see birds feeding their young in a nest which is symbolic of family.  It is likely that these birds are doves, which symbolize peace, but also parental sacrifice for the young.  The inclusion of doves and a nest expressed the wish for the couple to create a peaceful and nurturing family.  The carving on the cornice was typically associated with the bride and her new family, while the carving between the doors would be associated with the bride's original family as a reminder of her origins.  There is an unusual anchor between the doors that is possibly related to a trade or maritime occupation of the bride's father. 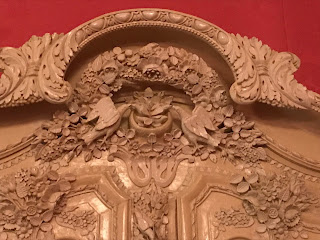 The two circular decorations with different motifs carved inside are in the center front of the armoire. On the left are tools associated with the grape harvest and the right is the wheat.  The presence of wheat symbolizes wealth, prosperity, and fertility. Grapes denote wine and happiness, but also both represent the Christian sacrament of communion. 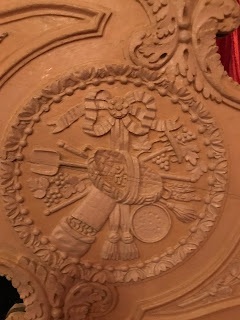 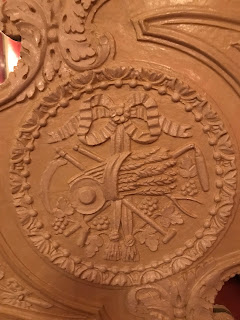 Musical instruments are featured along the bottom rail and are also a wish for happiness, but could also symbolize learning, education, and leisure.  Many flowers including roses, poppies, lilac, daisies, and carnations are also carved into the armoire and each have different meanings. 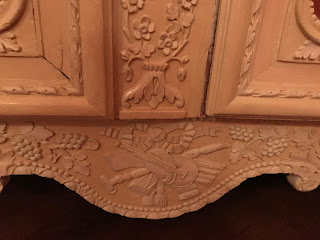 The mirrors on the front of the armoire were a late 19th century addition. Most examples of 18th century armoires from Normandy do not have mirrors and instead have unpainted wood panels. The mirrors are dated 1884 on the back so it is likely that they were added shortly before the time that Ruth Mills acquired the piece.

After the family donated the mansion to New York State in 1938, the mansion was under the jurisdiction of the Taconic State Park Commission and they did not employ conservators or historic preservation minded staff until the 1970s. In the interim, state workers painted many collections pieces in the house with a flat white latex paint. As a result, many collections pieces needed remedial work to remove this paint and exhibit them as the Mills's would have seen them.  The paint covered repairs resulting from age and exposure. In 2002, as part of an effort to restore Mrs. Mills' room, the armoire went to the Peebles Island Resource Center for conservation.


When conservators stripped away the white latex paint, they found two different shades of yellow paint, believed to have been applied when the mirrors were added in the 1880s. Once the white latex paint was gone, conservators did in-painting of the areas where the historic yellow paint had been stripped away. In all, this work took 1141 hours to complete. On tour when we look into Mrs. Mills' room, it is hard to fully appreciate the time and care that went into carving the armoire in the 19th century and then restoring it to its former glory in the 21st.  After reading this blog, we hope that you can tour the mansion and look at the armoire with new eyes.