In the previous entry we explored the exciting new discovery of the artist who created Mrs. Mills' large portrait which hangs in the Boudoir. François Flameng, a French portrait artist, painted Ruth in 1909 during one of his many trips to the United States to paint well known ladies of society.  Yet finding the true artist of the painting was not the only discovery that we made.  We also discovered that Ruth's painting was part of an exhibition in February 1913 to raise money for women's suffrage.  Due to a comment made by a family descandant in an oral history interview many years ago, site staff were under the impression that Mrs. Mills did not look favorably upon the idea of votes for women.  Yet, with this new information, perhaps we can change our views on Ruth and what she did or did not support. 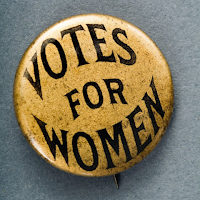 In 2017, we are thinking more about women's suffrage because it is the centennial for women's suffrage in New York.  It was still three years until the 19th Amendment, which granted women the right to vote nationally, so New York was ahead of the game.  New York State will be commemorating the centennial in many ways including a new exhibition at the New York State Museum opening in November 2017.  At Staatsburgh, in honor of the centennial, we invited Dr. Susan Goodier , a professor at SUNY Oneonta, to speak at one of our “Gilded Age Tea & Talk” programs, to explore how this momentous issue of the day was viewed by people of Mrs. Mills’ social set.  As the author of a study on the anti-suffrage moment in New York State (No Votes for Women: The New YorkState Anti-Suffrage Movement. Univ of Illinois Press, 2013), Dr. Goodier brings a special expertise to both sides of this contentious early turn-of-the-century issue.  We also are continuing to research the relationship between Ruth Mills and the suffrage movement. This blog explores some of our findings about that relationship.


With the discovery that Flameng painted Ruth's portrait, we were able to do further research.  One of the first things that we found was that the painting was included in a portrait exhibition in February 1913 at the Glaesner Gallery in New York City.  Organized by Mrs. Philip M. Lydig, the exhibition of "Portraits of Fair Women" raised money for the Women's Political Union.  Some of the other portraits in this exhibition included Mrs. William K. Vanderbilt (her daughter was married to Ruth's son at this point), Mrs. Harry Payne Whitney, Mrs. Clarence Mackay, Mrs. Robert Goelet, and Mrs. I.N. Phelps Stokes.


Exhibitions of works of art were a common way to raise money for a variety of social causes during the Gilded Age.  In an age before ubiquitous, high-quality color photographs, traveling exhibitions of portraits and other types of paintings soon after their completion by the artist, were frequent and helped promote the artist’s career, particularly when the work of art was destined for a private collection.  Such travelling exhibitions also helped Gilded Age society celebrate an ideal of feminine beauty as embodied by prominent members of Gilded Age society.  The often highly-idealized and flattering images of society women such as Mrs. Mills declared their beauty, as their inclusion in such exhibitions declared their altruism.  Ruth herself was among the organizers of a modern art exhibition in 1915 to raise money for the Fraternitié des Artistes Fund for the relief of destitute families of artists in France.


In the case of the 1913 exhibition for the Women's Political Union, Ruth certainly had a connection to the organizer if only an implied connection to the cause.  Rita de Acosta married Captain Philip M. Lydig in 1902, and actively supported the cause of women's suffrage.  We don't know how close Ruth was to Mrs. Lydig, but we do know that Philip Lydig was a frequent guest of the Mills at Staatsburgh before his marriage.  His name appears in Staatsburgh's guestbook four times during the years of 1899-1901.  When the Mills' daughter Beatrice married the Earl of Granard in 1909, the Lydigs attended the wedding.  The Lydigs and the Mills attended many of the same social events.  Perhaps Ruth agreed to lend her portrait as a favor to an old friend?

We found Ruth's support of a suffrage event unusual because oral tradition had always told us that Ruth was opposed to suffrage.  Alice Blair, the daughter of estate gardener James Blair, remembered in an oral history that Ruth never liked big yellow mums because they reminded her of suffragettes.  We had the sense that Ruth felt that the cause of suffrage was not something a woman of her class should be involved with because upper class women shouldn't lower themselves to became involved with politics.  Many conservative women felt that their identity preserving the home and family was threatened by the imposition of traditionally masculine political responsibilities.

Many women of Ruth's class were on record with their opposition to women's suffrage.  Mrs. Stuyvesant Fish was quoted in the New York Times saying, "Women's power in the world is tremendous...What more could she do even if 'rights' were given to her?  She influences her husband; the two minds work together, and through the man she sends out her power to influence for good or evil.  Isn't hers a greater power than the vote?"

Mrs. Fish did not think women were inferior in any way, but she just did not believe voting would do any good.  She continued, "Do not misunderstand me, I simply do not believe in suffrage or that women would be any better if they had the vote.  A woman has her husband and her home, but I do not want to be recorded saying that women are stupid.  They are as educated and cultured as men."

One major supporter of women's suffrage from the ranks of elite society was Alva Vanderbilt Belmont who devoted her later life to the suffrage movement.  She donated large amounts of money to the cause and held suffrage rallies at Marble House, her home in Newport.  In fact, her influence was so great, about a year after The New York Times published Mrs. Fish's anti-suffrage sentiments, the paper then reported that she has been converted to the cause by Mrs. Belmont.

As far as we know, Mrs. Mills never publicly declared her support for or opposition to suffrage in the way that Mrs. Fish and Mrs. Belmont did.  It is possible that her agreement to include her portrait among the 57 paintings in the exhibition was a tacit form of support.  Yet the exhibition was as much about showcasing great art as it was about raising money for the cause.  The admission cost was $2, but the last day of the exhibition was free for art students, college students, and settlement house workers.  The exhibition allowed these women to promote their style and beauty for all to see while at the same time feeling altruistic about raising money for a worthy cause.


Another woman whose portrait was included in the exhibition and who was involved in the fight for suffrage was Katherine Duer Mackay (Mrs. Clarence Mackay).  She and her husband, like Mrs. and Mrs. Lydig, attended many social events with Ruth and Ogden Mills and were also invited to Beatrice's wedding.  As we continued to search for Ruth's connection to suffrage, we found evidence of Ruth's attendance at an event organized by Mrs. Clarence Mackay to raise money for suffrage.  The event was a tableau vivant at which society women dressed and posed as historical women.  For example, Mrs. Mackay posed as Florence Nightingale and Mrs. William K. Vanderbilt, Jr. posed as Joan of Arc.  Did Ruth attend the event because it was merely a society event presented by a friend, or did she support the cause?  We cannot know for sure, but the fact that Ruth participated in two events raising money for women's suffrage leads one to conclude that she wasn't anti-suffrage.  There is no evidence that she attended an event raising money for the anti-suffrage movement.

Even though these two events were the only suffrage-related ones with Ruth Mills in attendance discovered so far, we will continue to look for more connections.  There were many later events with participation by Ruth's relatives.  Her son's wife, Mrs. Margaret Rutherford Mills, was a patroness of the Paul Jones Suffrage Ball in 1915.  The newspapers said that the event was one of the most notable affairs given for suffrage that year.  In addition, Helen Rogers Reid (Mrs. Ogden Mills Reid), the wife of Ruth and Ogden's nephew, was active in suffragette circles and was the treasurer for the New York State Women's Suffrage Party in 1917 when New York State signed women's suffrage into law.  Support for suffrage among the elite was a mixed bag, but there is certainly evidence that many elite women did support the cause with both money and manpower.  Ruth's ideas about the cause cannot be fully known, but it is certain that she would have thought about the issue and cultivated her own opinions, and the fact that women were constantly thinking and forming their own opinions was exactly the reason many fought for the right to vote!