Since Staatsburgh has recently launched a Gilded Age Tea & Talk series, we have been looking more into the custom of having tea.  The winter pilot run of the Tea & Talk series has proven to be a successful addition to our site's programming and each tea has a waiting list.  Drinking tea is the perfect time to think about proper etiquette and each talk in the series looks at some of aspect of etiquette during the Gilded Age.  In case you have reserved a space on one of Staatsburgh's teas or just plan to have a tea party, here are some tips that will help you survive an afternoon tea without making an embarrassing faux pas.

The Custom of Having Tea

The custom of having tea was popularized in England by Catherine of Braganza.  She was a Portuguese princess who married King Charles II.  Tea was the preferred beverage in Portugal and she brought that taste to England when she arrived in 1662.  She often invited her friends into her bedroom chamber to share tea with her and drinking tea soon became a fad in England.


The tradition of having an afternoon tea was popularized by Anna, Duchess of Bedford, in the 1840s.  The Duchess of Bedford was a lady in waiting to Queen Victoria and married the 7th Duke of Bedford.  During the late 18th and early 19th centuries, dinner began to be served later and later until the normal time was after 7pm.  A very light luncheon was added, but there were still a long spell that left many feeling hungry.  The Duchess of Bedford requested light sandwiches with her tea to help her get through the long gap between meals and she began to invite others to join her.  The custom spread and soon"afternoon tea" became a staple of life for aristocratic women.

Although afternoon tea is often mistakenly called high tea, the two are quite different indeed.  Afternoon tea was most frequently observed by upper class ladies around 4pm.  They would gather outdoors or in a parlor setting to eat some small sandwiches and drink tea in order to avoid getting faint before dinner.  Afternoon tea provided a reason to visit one's friends and enjoy the company and conversation.

While afternoon tea was something that began with the upper classes, high tea had working class origins.  High tea was considered a full meal served once the men arrived home from the factories between 5pm and 7pm.  High tea was an actual hot meal eaten around the table.  Tea is served (of course!) and the meal begins with a hot dish followed by some bread and cakes with butter and jam, vegetables, and pies.  The upper classes also developed a high tea, which was a meal that was easy to prepare, and could be fixed for times that the servants were away or given the day off on leave. 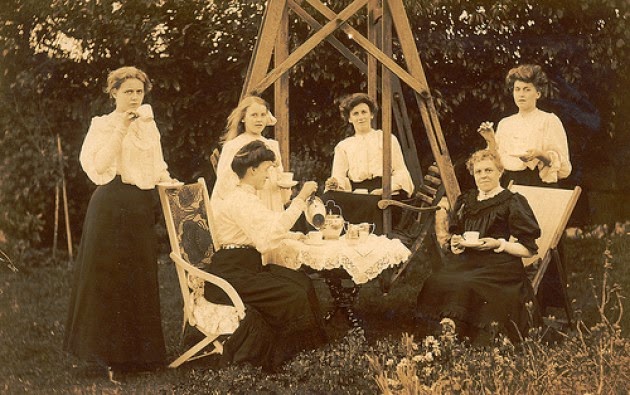 In order to behave properly at a tea, there are several essential etiquette rules that one should follow.

And finally, there is the matter of whether it is appropriate to put the milk in before or after pouring the tea.  It was thought at one time that this indicated class differences because pouring boiling water into the cup could potentially crack it.  Wealthy folks could afford to break a few tea cups, but others of lesser means may not want to risk ruining any of their good china.  Many consider pouring the milk in first to be gauche and a faux pas because you cannot judge how the milk is going to affect the strength of the tea merely by the color.  If you add milk after the tea, then it is easier to determine how you would like the tea to taste and add more milk accordingly.  On a recent episode of Downton Abbey, Carson, the butler, very clearly makes a disapproving face when a guest asks for tea with milk added first.  There is no fudging proper tea etiquette!

If you attend an afternoon tea, at Staatsburgh or anywhere else, just follow these rules and you will fit in splendidly!