The Lowdown on Boxing Day

Since I was a young child I have always received a calendar for Christmas.  As soon as I opened it I would write in all the birthdays of my friends and family and examine all of the fulls moons, American holidays, Canadian holidays, Australian holidays.  I knew the meaning behind most holidays on the calendar because they were the traditional holidays commonly celebrated here in the US.  One holiday, however, always stuck out to me: Boxing Day.  Every year I would notice that Boxing Day came the day after Christmas and every year I thought to myself, "What is Boxing Day and who actually celebrates it?"  With holiday celebrations still in full swing on December 26th, I wondered what kind of holiday would dare to occur so close to Christmas, the behemoth of all holidays.  After watching the Downton Abbey Christmas special a few seasons ago that showcased a traditional fox hunt on Boxing Day, I thought I would do some research to uncover the mystery behind this lesser known holiday. 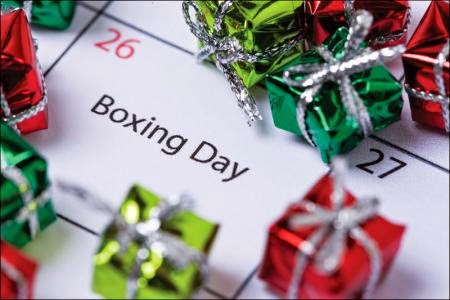 As I began to read about the origins of Boxing Day, I found that there are several explanations about the rise of the holiday and there is no one definitive answer.  Traditionally, Boxing Day has been a day of alms giving to the poor.  One thing is certain, it is a decidedly British holiday and not one that ever took hold in the United States.  It does continue to be an official holiday in Canada, but it is best known today as a day to watch hockey and shop special Boxing Day sales.

We often find that there is no one definitive story when it comes to past events and people.  Historians must do their best to understand differing stories and place them in context.  History is not just a bunch of facts that make a story.  It is much more complex.  History is full of perspectives and stories and we must realize that not all stories were recorded or have been remembered.  It is useful to determine what things have been remembered and why.  Let's take that framework and begin to explore the stories surrounding Boxing Day.

As the king saw a poor man gathering firewood, he braved the tough weather to bring him extra food and supplies.  Although the song dates to the 1850s, many believe that the origin of the tradition lies with Wenceslas who was known and remembered as a martyr and saint.  Wenceslas was reportedly murdered by the directive of  his own brother in the middle of a great feast.  This song helps cement the memory of Wenceslas as a good and kindly leader who may or may not have played a role founding Boxing Day.

The origins of the holiday may also have been at the hands of the Church of England.  Churches collected monetary donations throughout the advent season and emptied their collection boxes on December 26th in order to hand out money to the poor.  Yet another story traces the origins of the name to the tradition of the aristocracy to give their servants a Christmas box on the day after Christmas.  These boxes were filled with food, blankets, and other useful things.  Many servants had to work on Christmas Day, but they were given the next day off to be with their family and the Christmas box that they received allowed them to have their own feast.  There are many theories about the origins of the name, but ultimately it was the sentiment of giving that was passed down through the years and embodies the spirit of Boxing Day.

In England, Boxing Day has remained a day when families box up goods to give away to the less fortunate.  It has also turned into a shopping day, similar to Black Friday in the United States, yet the altruistic origins of the holiday have not been entirely forgotten.  While the Mills family may not have taken part in Boxing Day here in the United States, their friends and relatives across the pond certainly did.  We hope that on December 26th, everyone can take a moment and remember the kindness and generosity that are at the heart of Boxing Day.