Historic Mattresses at a Glance 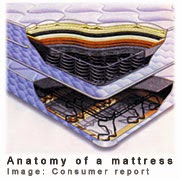 Here at the Staatsburgh, we’ve recently developed an interest in the historic mattresses in our collection. Our investigation into the topic has led to surprising discoveries about the ways mattresses have changed over the course of the last century. The modern mattresses we all sleep on today are composed of a foundation (also known as a box spring), which underlies an innerspring unit, which is then surrounded surrounded by many layers of upholstery all contained within a padded, quilted exterior.

However, mattresses were not always so sophisticated or comfortable. The innerspring mattress that most of us sleep on today was patented by a man named Heinrich Westphal in 1871. Unfortunately, Westphal did not live long enough to see his invention succeed. This type of mattress was very expensive and did not become widely available until the middle of the twentieth century.

This begs the question: what were mattresses like before? Mattress construction has changed greatly over the course of time from stuffing, to woven wire, and finally to the innerspring model. Mattresses may seem quite mundane. To be sure, they don’t flaunt the same glamor as other antique furniture. You would never catch someone boasting about owning a nineteenth century mattress! However, the mattress has seen a great deal of change in its construction during the last century. These changes show us incremental advancements in the technology of the era as well as changing attitudes about health.

Mattresses in the nineteenth century were stuffed with a wide variety of materials. On the lowest end of the market, we find mattresses (that were essentially bags) stuffed with corn husk, excelsior, or palm leaves. These mattresses generally cost between $2.00 and $3.00 (note that all prices are being pulled from the 1897 edition of the Sears catalogue). In the mid-range, there were wool, moss, or cotton stuffed mattresses, which averaged between $4.00 and $5.00. At the higher end of the price scale, we find them stuffed with hair. These ranged in price from $7.25 all the way up to $19.75. A mattress would be covered in cotton ticking (a type of very tightly woven fabric) and weighed about forty pounds on average. However, a stuffed mattress could not stand alone and would have to be placed on top of a box spring.

Certain kinds of stuffing were considered better than others and some kinds of stuffing were preferred for specific functions. For example, in a Sears catalogue from 1897, the moss mattress is advertised as recommended by physicians for invalids.  Based on housekeeping manuals from the period, it seems that hair (usually horse hair) was the most desirable type of stuffing for a mattress. Household Discoveries specifically advises those stuffed with curled hair, although, one stuffed with felted cotton would do as well. However, these manuals do not give a particular reason for their preference toward hair mattresses.


While today we consider feather bedding a luxury, some in the nineteenth century disapproved. A feather bed is not a mattress stuffed with feathers as I originally thought. In fact, a feather bed is actually more like a modern pillow topper. That is, it is a bag of ticking stuffed with feathers, which is then placed over a regular mattress. These were particularly popular in continental Europe, but were less popular in Britain and America. According to Household Discoveries, feather beds should be reserved for children and the elderly, only being used for healthy adults in cold climates. Even Florence Nightingale herself advised against the use of feather beds. The reasoning behind this condemnation is somewhat unclear; however, it seems that it stems from the belief that feather beds were too indulgent.


As you can imagine, mattresses in the nineteenth century stuffed with organic materials would have been plagued by bed bugs, mice, and a whole host of other pests. Unfortunately, the nineteenth century didn’t have much to offer by way of extermination. The methods were limited to boiling water, peat smoke, oil, kerosene, and various plant extracts.  Sleeping with bugs

In the early 1900’s, legal steps were taken to ensure the health and safety of mattresses with the institution of tagging laws. These laws required manufacturers to attach a tag displaying the stuffing contents, somewhat similar to ingredient lists on food products. This prevented manufacturers from being dishonest and reusing secondhand, unsanitary stuffing materials. These laws were part of a larger trend in changing attitudes about health and safety during the early twentieth century. This period is referred to as the Progressive Era of American history, which brought great social and political changes. For example, the Pure Foodand Drug Act of 1906 was to control the trafficking of mislabeled or hazardous food and drug products and required manufacturers to list the active ingredient on all drugs.

Wire mattresses were revolutionary in their supportiveness as well as in their lack of vermin. Because these mattresses did not contain organic materials they did not attract mice and insects as mattresses had in the past. Solid, stuffed mattresses would become lumpy and uncomfortable as they were used. Wire mattresses, however, could hold their shape and provide much-needed support to the sleeper. And one must imagine that it would be easier to sleep comfortably knowing that the mattress was not infested with an array of insects.

For many years, the springs used in mattresses were Bonnell Coils, which are shaped like an hour glass and had the same construction as the seats in a buggy. This type of coil is still used today in mattresses on the lower end of the market.

Then, James Marshall invented the pocketed spring coil in 1900. Marshall Coils were individual springs encased in a cloth pocket that would move independently of one another as opposed to a system of springs that were all connected. These types of mattresses would have been much more comfortable and supportive than their predecessors as they conform to the sleeper’s body and reduce motion transfer. They, too, are still used by modern mattress manufacturers. Marshall Coils were popularized by Simmons Beautyrest, which is a very popular brand.  We may take our beds for granted today, but we can be thankful that the last century of mattress innovation resulted in a night of sleep that is both comfortable and free of insects.


Thank you to our summer intern, Bethany Zulick (Bard College '16), for researching and writing this blog entry.