One of the reasons we wanted to start a blog was to be able to highlight some of Staatsburgh's collections that are not always noticeable or highlighted on the tour. The house has so many collections items that it is impossible to include everything on a one hour tour! This is the first entry in a series that will explore many of the fascinating pieces in the house.

The upstairs furniture at Staatsburgh often receives the most attention, but the pieces furnishing the servants quarters also have stories to tell. All of the bedrooms in the basement and attic were furnished with tables, chairs, beds, and dressers that were very different from the pieces used by the Mills family and their guests. Where did this furniture originate and what style did the Mills select to furnish their servants quarters?

Occasionally we are lucky enough to have a piece that has a tag or marking that will provide clues about the origins of the piece. A label on the bottom of this table reads: 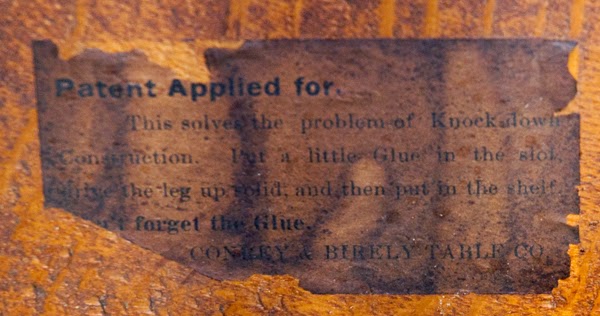 This solves the problem of Knockdown
construction. Put a little Glue in the slot.
Drive [?] the leg up solid, and then put in the shelf.
Don’t forget the Glue.


The way that the legs are attached to the table is unusual so it is likely that these instructions helped retailers to set up the table before it was placed on display.  The knockdown construction was useful for shipping purposes because the table was shipped in pieces to stores and individual buyers who ordered large quantities from the company.  The retailer and not the furniture company would have completed the final assembly.
In addition to the label there is an ink stenciled “24” on the underside of the top and the shelf. The “24” is faint and sideways in the photo. This is probably a model number, but could also be an inventory number. Large houses like Staatsburgh often kept an inventory of belongings. 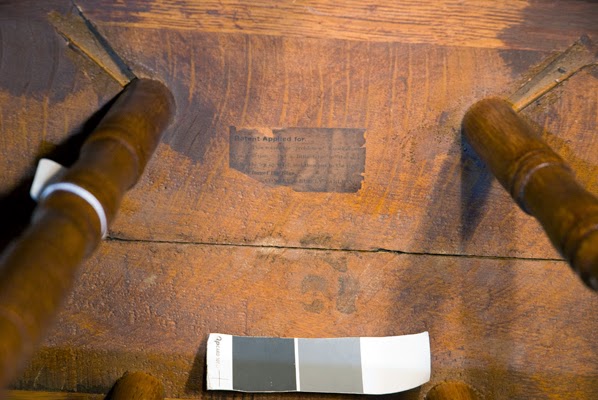 By looking at the label we know that the table was manufactured by the Conrey & Birely Table Company of Shelbyville, Indiana.  Located about 25 miles southeast of Indianapolis, Shelbyville was known as “Little Grand Rapids” (Grand Rapids, Michigan was one of the premiere furniture manufacturing cities in the US) due to the number of furniture factories in town at the turn of the 20th century.  The Conrey & Birely furniture company was in existence with this name from approximately 1884 until 1901 when Charles Davis became the president of the company and renamed it the Davis-Birely Table Company.  The company soon became the largest exclusive center table and library table factory in the world, with over 500 employees.  The Shelbyville Republican reported in 1898 that the company had received an order for 1,500 tables from a firm in London, England.  They shipped furniture to many European cities.  Though European furniture was desired by the upper classes, this style of American furniture was used by the masses.

The knockdown construction referred to on the label was a known specialty of this company.  This method of attaching legs to furniture required no tools or equipment and on September 29, 1896 Charles Birely received patent #568397 for his invention of this type of furniture leg attachment.  He applied for the patent on August 23, 1895 and since Staatsburgh’s table was built after the patent application and before the receipt of the patent, this information helps to date Staatsburgh’s table to late 1895-1896.  This date lines up with the remodel of the house that was completed in 1896.  The servants’ quarters were furnished with all new furniture, which speaks to the Millses’ desire to provide the servants with comfortable and well-furnished spaces.


This table is considered Eastlake style, named after Charles Locke Eastlake who was an authority on furniture design and author of the influential book, Hints on Household Taste which advocated for reform of the arts.  Eastlake wanted to move away from the overly elaborate and curvilinear style of the early Victorian era and towards simple rectilinear forms. Many consider the Eastlake style to be a precursor to the popular Arts and Crafts movement because Arts & Crafts designers such as Gustav Stickley embraced the simplicity and craftsmanship so integral to Eastlake’s values.  Both Eastlake and Arts and Crafts were a reaction to the mass manufacture of furniture and even though the Eastlake style eventually lost popularity, the examples that remain (such as this table) illustrate the clean lines and simplicity of the style.

For over seventy years the former servants’ quarters of Staatsburgh were utilized as offices by New York State Parks, but the Taconic Regional Headquarters were recently relocated to a different building.  In preparation for the restoration of the basement, this table was treated and restored for installation in a footman’s bedroom.  There are duplicate tables at the site, but this one was selected for display.  The table was cleaned with a water-based gel that was formulated to remove the soot and dust that coats much of the furniture in storage at Staatsburgh. The gel removes just the dirt and leaves the varnish intact.  The photo above shows how dramatically the treatment improved the visual appearance of the table.  When the restoration of the basement is complete and it is added to the house tour, this table will be one of many pieces of servant furniture on view to the public.

*Thank you to David Bayne and Amanda Massie of the Bureau of Historic Sites at Peebles Island State Park for providing images and assistance.