"The new speed limit signs which were recently placed north and south of the village by Mrs. Ogden Mills do not seem to have any effect on the motorists with their speed."

No self-respecting 'motor-head' would ever, voluntarily, put speed limit signs outside their house. So, it's safe to say the Mills probably weren't car people. That's not to say they didn't enjoy the status and luxury of the new inventions to sweep the nation during their years at Staatsburgh.

A century ago, the Mills family were known for their successful racehorses. Yet, many people today associate their estate with 'horseless carriages' - cars! Every October, Staatsburgh State Historic Site welcomes hundreds of antique cars to its main lawn.

Sadly, with the Covid-19 pandemic, the 2020 "Gathering of the Old Cars" had to be cancelled, so we thought it would be fun to explore some of the antique - or, rather new for the era - automobiles owned by the Mills and their employees. In our archives, we found period photographs of the family and servants enjoying the open roads.

Like most American garages at the turn of the century, the earliest automobile in the Staatsburgh archives is (likely) a Ford Model T, however there is debate that the car may actually be a Packard. Perhaps not exactly what you were expecting from one of the Gilded Age's wealthiest couple. But, there’s no proof the Mills owned this car.

The photograph below shows the automobile being driven by Gabriel Leeuw Jr., the son of the Mills’ electrical engineer. 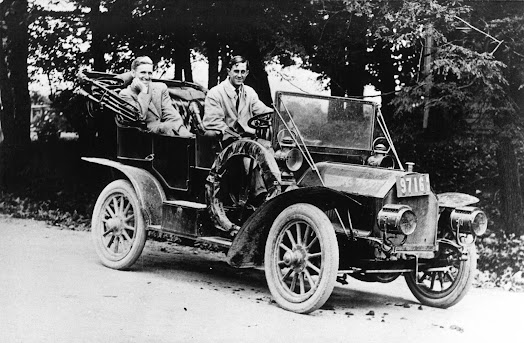 As with many of these early cars, it is difficult to determine exactly what year this Model T is - however, it is strikingly similar to these Ford 'Touring' models (two rows of seating) from 1909-1915:

These Ford Model T touring cars were famously brought on camping trips by Henry Ford and his friend/idol Thomas Edison! From 1914 to the early 1920s, Ford, Edison, Harvey Firestone (of Firestone Tires), and John Burroughs (a native-Hudson Valley naturalist) - calling themselves The Vagabonds - set out each summer with a caravan of fully-loaded Model Ts across the East Coast. A chance to escape their busy lives, mixed with free advertising for Ford's machines; the trips were finally called off after receiving too much publicity - with Firestone even calling them a "traveling circus."

Back in Staatsburg, a father and son team, Gabriel Leeuw Jr. and Sr. both work on the Staatsburgh estate. Leeuw Sr. was a Dutch immigrant who worked for Ogden Mills in New York and then moved to Staatsburgh when the mansion was first electrified in 1895.  In 1907, it is reported Gabriel Leeuw Jr. was at work repairing one of the estate's barns. A falling board nearly killed the younger Leeuw, resulting in 6 stitches to this head!  Gabriel Leeuw Jr. also worked the family's cars and posed with them in the following photos: 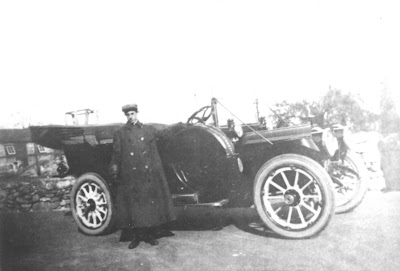 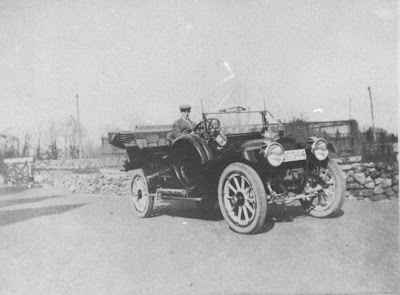 At first glances this may look like the earlier car, but this automobile has in-fact been identified as a 1910s-era Packard. The first clue is the spokes - notice the 10 spokes in the front wheel instead of 12. Yet the key is the hubcaps. According to a local car expert, Packard hubcaps have a distinctive shape from the teens to the 1930s. If these photos were in color, he states, the hubcaps would be a distinctive red.
Interestingly, Leeuw appears to be dressed as a chauffeur in one. It is unknown if the Mills had an official chauffeur at this time, so it is likely this may have been the younger Leeuw's job. However, we know he didn't stay in Staatsburg for long and began looking for jobs elsewhere. Sadly, Gabriel settled in Bridgeport, Connecticut in 1918, where he died shortly after of influenza and pneumonia.

Now we’re talking. The first official car we know to be owned by the Mills is a bit more fitting for their wealth and status: a 1914 Rolls Royce Silver Ghost limousine. The Silver Ghost model was called "the best car in the world" by Autocar in 1907 and has gained legendary status alongside the Volkswagon Beetle or Mini Cooper. 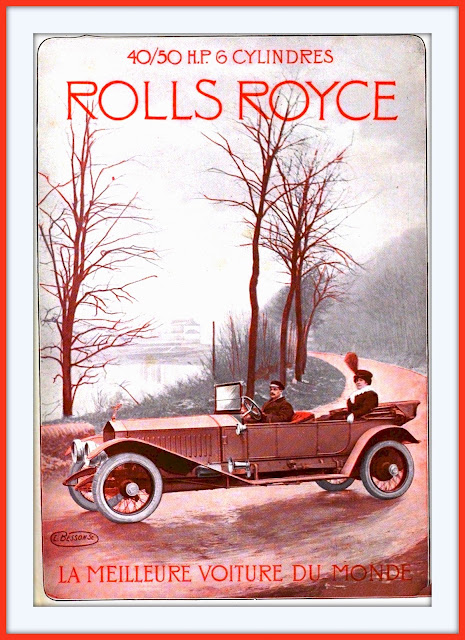 Referred to by its unique chassis number, 40UB, the Millses' Rolls Royce was purchased on June 23, 1915. 40UB was imported by Robert W. Schuette, a New York agent for Rolls Royce.

You can view the original order form from Schuette below:

Sharron Bland, Records Administrator for the International Club for Rolls-Royce and Bentley Enthusiasts, believes 40UB was sold to Ogden's son-in-law, the Earl of Granard (husband of the Millses' daughter, Beatrice), in April of 1933. Yet a small document (below) in our archives shows 40UB was owned by Ogden Livingston Mills after that date, as the "Former Secretary of the U.S. Treasury" (a position the younger Mills held from 1932-1933). As of this writing, it is unknown if the car still exists.

However, there is a second Rolls Royce Silver Ghost ordered by Ogden Mills shortly after. According to Charlotte Infantino, of the Rolls-Royce Foundation, this second Rolls, chassis #165BW, was built in October, 1918 for delivery after the war. A photograph of Mr. Mills' chauffeur, Joseph Wiseman, picking up the car on Long Island in 1919, appears below: 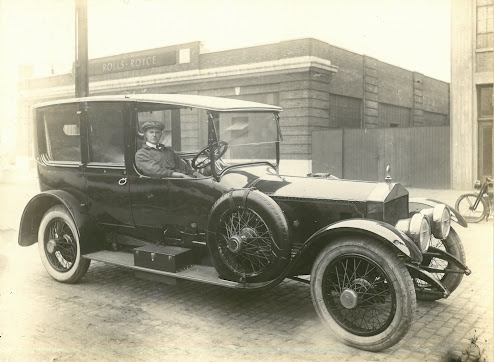 Common for high-end cars of that era, the chassis and "coach," or the actual body of the automobile, were built by different companies. 165BW had a Hooper coach. Hooper were the royal coachbuilders and often built for Daimler as well. Tom Clarke, a Rolls Royce enthusiast, confirmed this information by noting that the distinctive upward curve of the molding behind the door and the shape of the rear wings were both characteristic of Hooper. The headlamps are by C.A. Vandervell, a British manufacturer.

The ultimate fate of this Rolls Royce is unknown to us too.
We can't talk about Ruth and Ogden's limousines without talking about their long-time chauffeur; Joseph "Benny" Wiseman. Born in England in 1887, he immigrated to the US that same year. Wiseman was a resident of Staatsburg by 1914, and a naturalized citizen the following year. We know he started working for Ogden Mills by at least 1919 - yet, a court document states it may have been years earlier. According to Wiseman's daughter, at the conclusion of his job interview, Mr. Mills handed her father an unfolded road map and asked him to fold it up. Wiseman did so, and Mr. Mills responded by saying "Good, you know how to fold a map. You're hired!"
As the chauffeur, Wiseman earned $250 a month. He was responsible for the maintenance of all the automobiles and garages, in addition to his driving duties. His family was allowed to accompany him when working at the Millses' properties in NYC and Newport, however they had to stay behind when he traveled to Millbrae and Paris with the Mills.

His daughter also told staff that Ogden Mills liked to have Mr. Wiseman drive fast. Mr. Mills typically took a particular train from Staatsburg to Manhattan on weekday mornings, and “everyone in town” knew to stay off the road a few minutes before the train departed, because Mr. Wiseman would be driving Mr. Mills to the station at top speed! 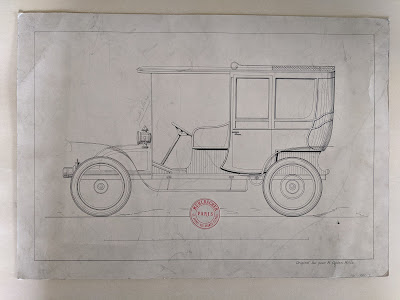 This document remains a mystery to our staff. Found upstairs in the archives, it comes with limited information. Muhlbacher, located on the famous Avenue des Champs-Élysées, was a well-known coachmaker at the turn of the century, similar to Hooper. Yet, this gives us no indication of who made the chassis. 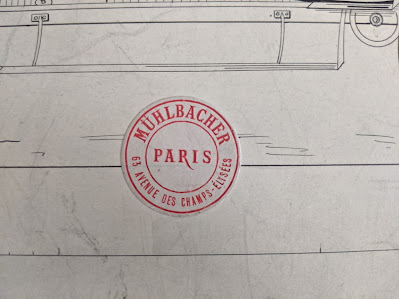 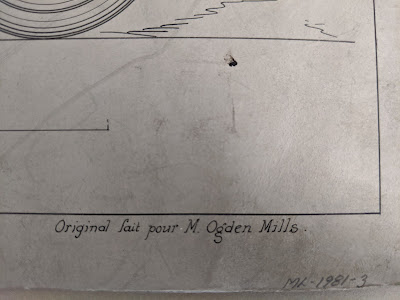 Our best guess is Renault. The 1905 Renaults, below, with the swooping hood and curved-bottoms of the passenger doors, match the drawing above. While today Renault is seen as an affordable car for many Europeans, at the turn of the century the French automaker was selling to the upper classes of the emerging car market with its engineering billed as "the highest quality". The Renault Type V(a) chassis alone cost 16,500 Francs in 1905 (a coach by Muhlbacher would cost extra, of course). In 1905, before Henry Ford unveiled the assembly line, each Renault was hand-built by a relatively small scale operation of 800 workers. The company began building their own engines and establishing a motor-racing division to raise publicity.

If it is a 1905 Renault, this document would pre-date the other cars already discussed. The Mills certainly visited Paris at this time, and could afford such an automobile, but would not purchase their 120-room French mansion until 1914.

1905 was a major year for Renault, as they unveiled the new AG1 model. Paris ordered a fleet of them to be used as taxis in the modernizing metropolis. By 1907, London followed suit too. That same year, Renault became the best selling foreign brand in New York. The AG1 taxi cemented itself in history as the legendary "Marne Taxi." In the early months of WWI, as Germany was encircling Paris, the French government enlisted all taxis as troop transports to the fearsome fighting outside the capital at Marne. Their importance in the battle has been greatly overstated. The Renault taxis did not turn the tide of the battle, as only a few thousand reserve troops were moved. Despite their small role, the taxis became a symbol of a unified French people throughout the war.

Patriotism aside, the taxis' meters were on too, and the French government promptly received a bill for the rides.

Of course, the shift from horses to automobiles wasn't just for millionaires. An estate like Staatsburgh's Inderkill Farms had to keep up with the times. Below is laborer George Ackert working on the Mills estate in the 1920s. 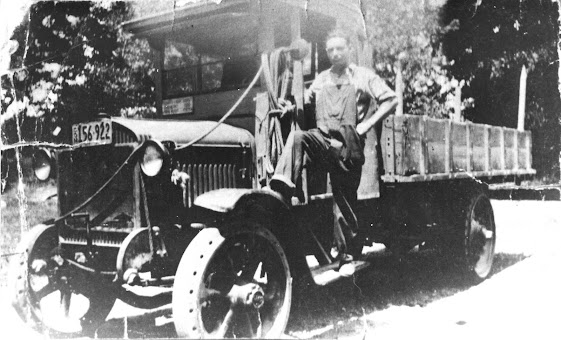 Born in the area, Ackert worked on the estate during the 1920s, when he was in his early/mid-thirties. George Ackert visited Staatsburgh in 1992 and described his job as "to drive the oxen and plow horses." He still had a red maple tree in his backyard transported from Staatsburgh's estate grounds. His brother, Wilson, was a longtime gardener for the Hull estate in Staatsburg.

Our archival records state George is photographed on a GMC truck. Our best guess beyond this is a 1925 GMC Model K truck, like the ones below. These machines had 9-speed transmission and a top speed of 20 mph! Their engines were rated from 33 to a whopping 51 horsepower (in comparison, a brand-new 2020 GMC Sierra pick-up truck has 400 to 445 horsepower).

Earlier models of the GMC had already proven themselves overseas during WWI. In fact, by 1918 more than 90% of GMC trucks produced were being utilized for military operations - totaling 8,512 trucks for American forces. A similar truck is seen in the advertisement above (left) and in an article about Staatsburgh's Inderkill Farms from The Field Illustrated in May, 1920.

These trucks provided strength and reliability. In 1923, GMCs were exported to Japan as aid in the recovery after the Great Kanto earthquake. Three years later, it only took a 2-ton GMC 5 days (and 30 minutes) to drive from New York to San Francisco!

So, where ARE Ogden's cars?

Sadly, when you visit Staatsburgh today, none of these beautiful machines are on display. Over the years, they were perhaps either been given to children/grandchildren or sold. All that remain are these photographs and the stories behind them (which are, frankly, easier to care for than a Rolls Royce limousine in our storage space). Yet we hope to have our annual "Gathering of the Old Cars" back on the west lawn as soon as it is safe to do so, when we can appreciate history on four-wheels!