On the 1st Day of Christmas...

...my true love gave to me...  Are you already singing it in your head?  "The Twelve Days of Christmas" is a Christmas carol with a very catchy tune.  This popular and enduring carol cumulatively lists increasingly lavish gifts during each verse from a partridge in a pear tree to twelve drummers drumming.  Even though the version we hear today identifies the gift giver as "my true love," some earlier versions of the song instead used "my mother."  Many different tunes were also used with the lyrics until the current version became the standard in the early 20th century. 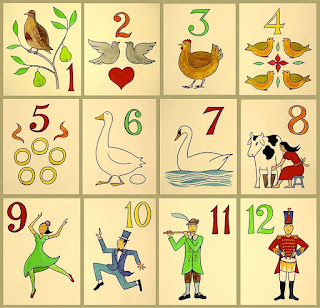 The song dates back to the 18th century and the first written record of the song was the children's book Mirth Without Mischief , which was published in London in 1780.  It is likely that the song had been circulating orally for many years.  Over the years, several tunes were matched with the lyrics, but the now standard melody was arranged by Englishman Frederic Austin in 1909. Austin based the tune on a traditional folk melody and popularized the longer flourish on “five go-old rings.”  He also added the word "on" to the beginning of each verse.  Austin (1872-1952) was a composer and musical teacher who served as the artistic director of the British National Opera Company.  In addition to his enduring contribution to "The Twelve Days of Christmas," he was best known for his restoration of the musical score of The Beggar's Opera, which ran for over 1,400 performances from 1920-1923.

Something you might notice about the Twelve Days of Christmas is the sheer amount of birds.  Why would anyone give birds as a gift?  Today it seem ludicrous, but in the 18th century birds were often a delicacy used in cooking.  Mince pies were often made with birds and swans were a delicacy in Britain that only the royal family was allowed to consumer (by all accounts, they no longer do).  Some have surmised that five gold rings may have originally referred to the rings on a ring tailed pheasant, which would have made birds the gift for the first seven days!  The 1780 printing of the song in Mirth Without Mischief shows rings as jewelry, but it is possible that rings did refer to pheasants in earlier 18th century versions.

Early version of the song also used the lyric "four colly birds," which later became "four calling birds."  The word colly derives from the Old English word for coal (col), and so a colly bird is a blackbird.  The 1909 Frederic Austin version of the song established the lyric "calling birds" even though "colly" was still frequently used until the 1970s.  Calling birds do not seem to indicate any specific species of birds, but I am sure both blackbirds and birds that call both make excellent mince pies. 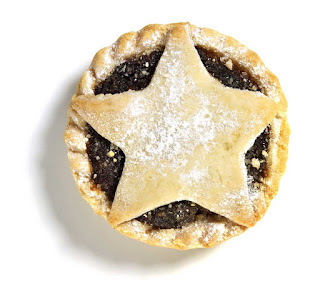 The partridge in a pear tree given on the first day of Christmas is another lyric that has been interpreted differently over the years.  Some versions use the phrase "part of a bough of a juniper tree."  A juniper tree is an evergreen and juniper swags on stable and barn doors have been common throughout Europe at Christmastime.  Juniper symbolizes protection and branches were often used in monasteries because the needles would hold holy water and they were also burned as incense.  Yet some have claimed that juniper became part of the song after folks misheard "partridge in a pear tree."

Although our true love meant well while giving these twelve different gifts, I think we all can agree that these gifts are better in theory and it is a rare individual that would actually want to receive them in 2020.  Though if you happen to know that rare individual, check out the PNC Christmas Price Index to found out what they would cost this year.  Spoiler alert!  The swans are very pricey!  But seriously, what would anyone do with so many birds!  As fans of the television series The Office can attest, giving the 12 days of Christmas during a workplace secret santa exchange will most likely end in disaster.  The recipient of the gifts was covered in scratches from the birds, and her cat even killed one of them.  Yet all was not lost and we have to admit the 12 drummers drumming was pretty cool finale.  Check it out (scroll forward to 7:58)!