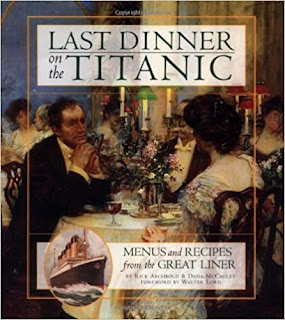 And just as in Parts I and II, we invite our readers to travel back in time to the Titanic’s maiden voyage, to Sunday evening, April 14, 1912, the Titanic’s last evening. The previous blogs described the meals served in the first-, second-, and third-class dining rooms. In this blog, we’ll visit the exclusive À la Carte Restaurant.


On the Titanic’s last evening, those passengers with the most refined tastes will dine at the À la Carte Restaurant. For an extra charge, they can personally arrange their menu with restaurant manager Monsieur Luigi Gatti and enjoy a more intimate setting than the massive first-class dining room. (On this ship, even intimacy is on a titanic scale: the À la Carte Restaurant seats 150 people.)

Mrs. Mahala Douglas, wife of Walter Douglas, Director of Quaker Oats, was to later recall, “We dined the last night in the Ritz [À la Carte] restaurant. It was the last word in luxury. The tables were gay with pink roses and white daisies, the women in their beautiful shimmering gowns of satin and silk, the men immaculate and well-groomed, the stringed orchestra playing music from Puccini and Tchaikovsky. The food was superb: caviar, lobster, quail from Egypt, plover’s eggs, and hothouse grapes and fresh peaches.”


Tonight, the À la Carte is the setting of a very special dinner party. The party’s hostess, Eleanor Widener, will soon become Ruth and Ogden Mills’ neighbor in Newport, RI; the Wideners are building a summer mansion next door to the Mills’ summer mansion. At her table, Mrs. Widener has the two prize catches of the ship’s company: the Titanic’s Captain, Edward Smith and President Howard Taft’s Military Aide, Major Archibald Butt.

The meal that Eleanor Widener’s guests enjoy is no doubt superb, but the experience of dining on the Titanic isn’t just about the food. It’s also about the people with whom they’re sharing the magical experience of the voyage. Philadelphia Main Line millionaire Marian Thayer has a memorable encounter at dinner; perhaps some of our readers have experienced something like it. On a ship, or on an airplane, or at a vacation resort, you’re thrown together with the same people for a certain amount of time, and you may find yourself unexpectedly establishing an extraordinary rapport with someone you didn’t even know hours before.

Marian Thayer and Presidential aide Archie Butt, strangers until they met on the Titanic, find themselves having an intimate heart-to-heart talk at the dinner table. Archie tells Marian that he’s dreading his return to the white-hot atmosphere of the Presidential election season that is about to commence. Two of his closest friends in the world, two men who he has served loyally as a Presidential aide, are about to start a vicious campaign against each other for the Republican nomination: former best friends President William Howard Taft and ex-President Theodore Roosevelt. Butt knows he will be caught between them and he’s not sure his nerves can stand the strain. Mrs. Thayer, who had had her own troubles, promises that she’ll meet Archie tomorrow morning to teach him a nerve-calming technique that’s helped her. Mrs. Thayer will remember the conversation for the rest of her life. She and Major Butt are not fated to meet the next morning…or ever again.

After dinner, Eleanor Widener’s party retires to the Titanic’s reception room to listen to the orchestra play. Their fellow first-class passenger Noël Leslie, Countess of Rothes, also retires to the reception room. A year from now, the Countess will be having dinner at a restaurant, when without warning, a sudden feeling will overwhelm her, a feeling she will describe as “cold and intense horror,” a feeling that she always associates with her tragic experience on the Titanic. She will have no idea what causes this feeling of horror until she realizes that the restaurant’s orchestra is playing the haunting Barcarole from Jacques Offenbach’s opera, The Tales of Hoffmann. She had last heard it in the Titanic’s reception room on the night of April 14th.

Captain Smith also adjourns with the Widener party to the reception room after dinner. He smokes cigars, but no after-dinner brandy for him – he’s on duty. Just before 9 p.m., he excuses himself and checks in at the ship’s bridge before retiring. He expects to be up early.


In first-class, the after-dinner activity is card playing.

In second-class, for those of a religious inclination, there’s a hymn sing in the dining room after dinner.

And in third-class…there’s a party.


Now, dear reader, if you were on the Titanic, which activity would you choose…card playing, the hymn sing, or the party…and what does that say about you?

In the 1950s, Walter Lord, the author of the classic history of the Titanic, “A Night to Remember,” interviewed third-class Irish passenger Katherine Gilnagh. Lord wrote that her “lovely eyes still glow as she recalls the bagpipes, the laughter, the fun of being a pretty colleen setting out for America.”

Precisely at 11:40, the ship gives a curious shudder. Some of the third-class passengers are thrown off their feet; but far above the dancers, the card players in the first-class smoking room feel just a jolt. It isn’t much of a jolt, but it’s enough to spill professional gambler Harry Romaine’s drink. A few men go out on deck to see what the trouble is.

What the trouble is…well, that’s a story for another day. Readers who would like to hear that story are invited to join us at Staatsburgh for our “Tales of the Titanic” tours each spring. But for now, let’s have the band play us out with a selection from the Titanic’s musicians’ playlist, The Merry Widow Waltz.


We’ll leave the Titanic with the music playing, the electric lights glowing, the women in their gowns and the men in their evening dress, enjoying what was, perhaps, the last few minutes of the gay Gilded Age.

Posted by Staatsburgh State Historic Site at 9:33 AM