It is currently tea season at Staatsburgh and we are serving scones, sandwiches, and our special Harney & Sons Staatsburgh blend tea almost every weekend.  We enjoy welcoming guests to the historic dining room for this unique experience.  During the Gilded Age, having tea was a very common social experience.  One of the more unique tea entertainments was the 'ice tea,' which was tea in conjunction with ice skating!  Ice skating became very popular during the Gilded Age when indoor ice rinks first opened, which lengthened the skating season.  Before 'artificial ice,' skating only happened on frozen outdoor ponds, and the weather played a big role in the number of skating days every season.  An event like an 'ice tea' was only possible once skating moved indoors! 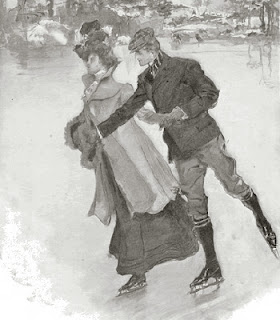 One of the earliest indoor rinks built in New York City was the St. Nicholas Skating Rink on the corner of West 66th Street and Columbus Avenue.  It opened in March 1896 after many wealthy families contributed to funding its construction.  Building the rink was an investment of about $300,000 which was contributed principally by members who were very wealthy.  Members included Cornelius Vanderbilt, Mr. & Mrs. John Jacob Astor, Mr. & Mrs. J. Pierpont Morgan, Robert Goelet, and Mr. & Mrs. Ogden Mills.  Once it opened, the club was open for only members on certain days.  The Gilded Age elite were able to buy their own exclusive private ice that was not open to the general public.  Ruth Mills was known to skate here nearly every morning in the years after it first opened.

Shortly after opening, this article about an ice tea hosted by Mrs. Mills appeared in the newspaper.  She planned to host an event at the St. Nicholas Rink for her friends that included both skating on the rink and tables to consume tea and light refreshments.  An ice tea had been successfully given by Mary Jeune, Baroness St. Helier who was a well known social hostess in London.  With the interest and talent Mrs. Mills had for ice skating, this was a perfect kind of event for her to shine as a hostess.


Though it was still a very unique event, the ice skating tea did become more common during the Gilded Age.  The article below from December 1916 showcases an ice skating tea that was attended by Irving Brokaw (seen below).  It was generally agreed that he was the most expert skater to attend. Irving Brokaw was part of a wealthy New York family.  His father founded Brokaw Brothers clothing store, which was very successful.  Brokaw was a lawyer, but never actually practiced law.  He was quite serious about skating and was the first American figure skater to represent the United States in the Olympics in 1908 where he placed 6th.  He also wrote an influential book of skating techniques entitled, "The Art of Skating." 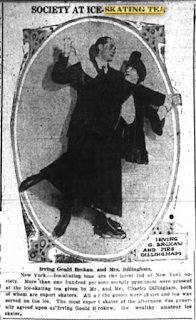 Irving Brokaw and his wife even hosted a skating tea in November 1915 at the Hippodrome, a large theater in New York City.  The paper talked about the unique nature of the event, even though we see that Mrs. Mills has previously hosted something similar.  The article calls it a skating tea, and it was a unique, novelty type party for about 100 guests.  Many members of exclusive society attended including Alva Belmont (formerly Vanderbilt), the Harrimans, and the Billings.  Ruth and Ogden’s names were not on the list of attendees, but I assume that Mrs. Mills had given up skating by this time.  She was 60 and it was just 5 years before she passed away.  At the party professional skaters performed and others skated for the enjoyment of it.  The entire theater was set up for a performance with ushers and lighting.  Those who did not want to skate sat in the front row to watch the spectacle.  Tea tables were at one end of the ice surface and musicians at the other.  It was the first party of its kind and was very popular among the elite social class.  Even though skating was something that all classes did, the Gilded Age elite still found a way to make it exclusive and create an event that was talked about for some time. 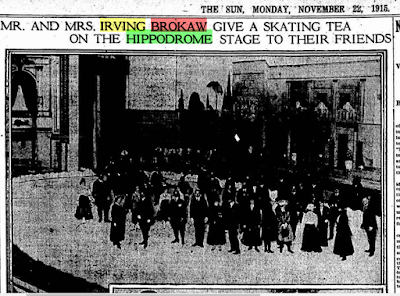