During the early years of the Gilded Age, divorce was quite uncommon and a reason for immediate expulsion from Gilded Age society. However, within a couple decades, divorce was more frequent even among families like the Vanderbilts and Astors. A few groundbreaking divorces from those high up in society, and more couples decided not to remain married to individuals they despised. Many Gilded Age marriages, especially among the upper classes, were not love matches. Parents would push for and even arrange certain marriages in order to cement a partnership, elevate social status, or increase finances, but the individuals were frequently ill suited to each other.  Many of these marriages ended in divorce, but what often resulted from these divorces was a happy second marriage. 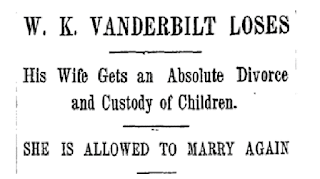 One of the first high profile divorces during the Gilded Age was between Alva Smith Vanderbilt and William K. Vanderbilt. She was known to have said, “Everyone woman should marry twice, the first time for money, the second time for love.” Her path seemed to mirror that trajectory. Alva Erskine Smith from Alabama made a very good match when she married William K. Vanderbilt. He was very wealthy and set to inherit even more money once his father died.

They were married for 20 years (and 3 children), but divorced in 1895.  Divorce at this time was nearly unthinkable, but Alva was strong and was determined to push the rules of society.  William's philandering ways had long been rumored in the gossip magazines and when he was spotted with a woman in Paris in 1894, she now had the proof.  After the fact, some surmised that William K. Vanderbilt paid the woman and set up the whole charade to get his wife to divorce him.  Vanderbilt didn't challenge the divorce suit and his "affair" ended as soon as the divorce was final.  After her divorce, Alva still received some invitations, but she was shunned by many.  She was determined not to be a societal outcast and came up with a strategy, but first she found true happiness with a man and remarried.

Just 9 months after the divorce she married Oliver Belmont, one of her former husband’s best friends. Incidentally, the Belmont Stakes was named after Oliver’s father August Belmont. Belmont had taken several long sea voyages with the Vanderbilts and it was clear to many that there was an attraction between he and Alva. He was also divorced, part Jewish, and was 5 years her junior. To their surprise, no church wanted to marry them so they were married by the mayor of NYC in a civil ceremony attended only by Alva’s two sons. She said, “I married that man who completed for me a life in its perfection in every sense. Few, alas, I believe have realized as I have marriage in its entirety.” Their marriage was a happy one, but sadly it lasted only 11 years until he died suddenly at age 49 of appendicitis.

The second part of Alva's plan to retain her place in high society involved marrying her daughter, Consuelo, to the Duke of Marlborough.  Consuelo was in love with another man and was practically forced to marry the Duke by her mother who was keen to make her daughter a duchess.  The Duke needed to marry a rich woman to maintain his castle and it was clear he was only interested in Consuelo's money.  Consuelo did her duty as a duchess and produced 2 sons, but Consuelo and the Duke were very unhappy together.  They divorced after 26 years of marriage though they had been living separate lives for over a decade prior.  Just like her mother, however, Consuelo found happiness in her second marriage.

So who was the man who was the love of Consuelo’s life? His name was Jacques Balsan (1868-1956) and he was a French aviator and industrialist.  He was an airman before planes and in 1899 he flew from France to Russia in a balloon. He held the record for the highest balloon ride in 1900 at a French exposition and purchased his first aircraft in 1905, a glider, and his first airplane four years later…so a very early aviator, but he was a self made man…not a part of the aristocracy or the landed gentry even though his family was part of the upper middle class. He had met and fallen for Consuelo when she was 17 before she ever married the Duke of Marlborough.  He met her at a ball 27 years before they eventually married, and told his mother, I met at the ball last night the girl I would like to marry.” He had even been a guest of the Duke and Duchess of Marlborough on several occasions and Consuelo always remembered his gift of a large toy lion that he brought her children. During WWI he sent her a postcard because he thought he might not return from a bombing mission and he wanted to have a final communication.

They eventually reconnected and fell in love. Once they were together, they lived a very happy life and remained happily married until his death in 1956, after 35 years of marriage. In Consuelo’s autobiography she spoke at length about her marriages, and about how happy her life was with Jacques. She said, “life with Jacques Balsan has brought me the profound happiness companionship with one equally loved and honored means.” They had an equal love and respect for each other and he doted on her. Her memoir was entitled The Glitter and the Gold…Balsan was the gold, while her earlier marriage to the Duke of Marlborough was the glitter.

There are many more examples of happy second (or third...or fourth...) marriages, but these this mother and daughter duo really gave credence to the oft mentioned idiom, "Like mother, like daughter..."
Posted by Staatsburgh State Historic Site at 3:33 PM