Christmas 1900 at Staatsburgh: The First Christmas of a New Century


Christmas 1899 must have been an enjoyable occasion because the family spent Christmas 1900 at Staatsburgh as well.  Many wealthy families like the Millses left the city to spend the holiday in a quiet, country location.  Nearby Tuxedo Park was also a popular location for many families.


Marking the beginning of a new century, 1900 brought a seven-month-long world's fair in Paris.  The 1900 Paris Exposition Universelle celebrated the achievements of the last century and the new developments moving the world forward in the next.  Over 50 million people from around the world visited the fair.  It was an election year in the United States and President William McKinley was re-elected.  He defeated William Jennings Bryan just as he had in 1896, but this time his running mate was none other than New York governor and rising star, Theodore Roosevelt.  The Poughkeepsie Eagle's Christmas day edition makes little mention of Christmas since the holiday had not yet become a mass marketing scheme.  For the Mills family, the holiday was a quiet family affair at their country home.

Looking at the Staatsburgh guestbook entries for December 25, 1900, there are 11 signatures for that date.  As with Christmas 1899, they are almost all part of Ogden's family and not from Ruth's family.  It was unusual for immediate family members at Staatsburgh to sign their own guestbook, but part of the family did this Christmas.  This is only the second instance in the book, but we can see Ogden's signature along with that of his son, Ogden Livingston, known as O.L.  At this time O.L. was 17 and spent his time away from his family at school so perhaps he felt more like a visitor to the house at Staatsburgh. 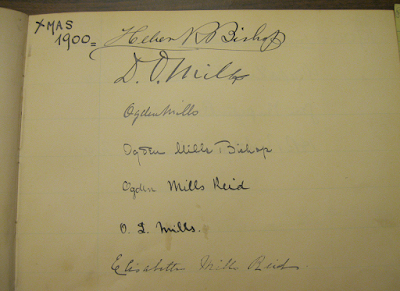 Ogden's close family gathered together at Staatsburgh for the holiday.  His father, D.O. Mills, along with his sister, Elisabeth Mills Reid, and her entire family were present.  Both of her children, Jean and Ogden, signed the guestbook this year.  At this time Whitelaw Reid owned and ran the New York Tribune, but after his death in 1912, his son, Ogden Mills Reid, took over.  During Ogden Reid's tenure, he purchased the New York Herald Tribune and combined the two papers, which became a profitable venture.  He remained editor until his death in 1947 when his wife Helen Rogers Reid took over (though some have surmised she was always the brains behind the operation).


Joining the Mills family was Heber R. Bishop and two of his sons, Ogden Mills Bishop, 22, and HR Bishop, Jr., 32.  Heber Bishop was the brother-in-law of D.O. Mills and the uncle of Ogden Mills through marriage.  He married Mary Cunningham who was the sister of Jane Cunningham, D.O.'s wife and Ogden's mother.  Jane was deceased at this point having passed away in 1888, but her sister Mary was still alive.  One would imagine that Mary was also part of this Christmas gathering, but is is possible that she did not sign the guestbook.  It is also possible that she spent Christmas with one of her six other children.  Many of them were already married with children.  Mary, however, did sign the guestbook when she visited with two of her children on New Year's Day in 1905.


Heber Bishop was a successful businessman who started a sugar refinery in Cuba and then made many smart investments in iron, steel, banking, mining, and railroad companies in the United States.   He was also known for his collection of Asian art.  Several pieces currently at Staatsburgh were purchased by Ogden Mills from Heber Bishop's estate auction after his death in 1902.  Bishop's best-known legacy was the gift of his jade collection to the Metropolitan Museum of Art.  He also arranged for Allard and Sons to reproduce his Louis XV style ballroom to show off the amazing collection of over 1000 carved jade pieces.  It was dismantled by the Metropolitan Museum of Art in New York sometime after the 1950s, but there has been a recent exhibition showcasing some of the pieces from the collection.


During Christmas 1900, the only person present who was not related to Ogden Mills was Winfield Scott Hoyt, but he was distantly related to Ruth Livingston Mills by marriage.  His uncle, Lydig Hoyt, married Ruth's aunt, Geraldine Livingston.  Hoyt's presence during many holiday occasions attests to a close relationship with the family that likely went beyond his employment by the family as a financial secretary or accountant.  The holiday was full of family members with a direct connection to patriarch Darius Ogden Mills, but it was also full of men named Ogden.  With Darius Ogden Mills, Ogden Mills, Ogden Livingston Mills, Ogden Mills Reid, and Ogden Mills Bishop all present, Christmas 1900 may have been one of the biggest gatherings of Ogdens in history!