Downton Abbey Spoiler Alert!  Do you remember the final  season of Downton Abbey when Lady Edith's magazine hired a new writer with the pen name of Cassandra Jones to write an advice column for women? Ms. Jones' column turned out to be very popular and when Lady Edith arranged a meeting with the author, she found out Cassandra Jones was none other than her grandmother's butler Septimus Spratt!

Maury Henry Biddle Paul took on a similar gender bending identity and pseudonym when he wrote for newspaper columns as Polly Stuyvesant and Cholly Knickerbocker while reporting on the activities of society's wealthy elite class.  He was born in 1890 so he missed much of the earlier years of the Gilded Age, but he started paying attention to society news at a young age.  Even though Ruth Mills died in 1920, he still included her in more than one column when he reported about the status of the Millses several homes.  The Gilded Age elite were not immune to the prying eye of the media just as celebrities today are constantly hounded by paparazzi.  The fact that salacious gossip sells is not a new concept!


Today gossip columns are everywhere - in the form of television shows, internet blogs, and some still remain in magazines and newspapers.  Gossip columnists have a long history including Loella Parsons in the 1910s and 1920s, Hedda Hopper in the 1930s and in more recent years Liz Smith, Ted Casablanca and internet blogger Perez Hilton.  Some columnists such as Casablanca and Hilton assume pseudonyms, which became part of their persona and brand. 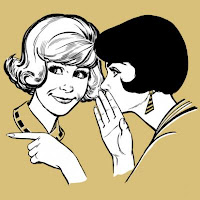 Most gossip today covers celebrities, mainly actors and entertainers, but during the Gilded Age, the general populace had a fascination with society figures.  Folks were fascinated with the lives of the wealthy elite and society columns provided a look into the upper class elite for folks not privy to that lifestyle.  Ruth and Ogden Mills were part of that group and appeared in the society columns many times.  While the society pages consistently wrote about the established elite, they often also chided the many social climbers who were trying to work their way into the circles of the Vanderbilts and Astors.  Yet many of these individuals did not complain about these negative connotations because they relished their name in print.  Society columns were starting to serve the calculated purpose of helping folks establish their social prestige.   Society writers had an agenda with the information they released, but so did the social elite.  There was a careful manipulation of the information released and the establishments frequented in order to present an image that would be written about and in turn would further cement their social status.

Paul was not the first or only person to write under the name Cholly Knickbocker.  The name was first used by John Keller in a column for the New York Recorder from 1891-1896, but once Keller moved to a paper owned by William Randolph Hearst, the name stayed with papers owned by Hearst, first the New York American and then the New York Journal - American.  The name invoked Washington Irving's character, Diedrich Knickerbocker, while also poking fun at the way many upper class New Yorkers pronounced Charlie.  Maury Paul took over the name in 1919 and continued to write about the life of the "Four Hundred" until his death in 1942.  The name did not die with Paul, however, and in 1946 Igor Cassini assumed the moniker.  One of Cassini's assistants, Liz Smith, later became one of the most well known gossip columnists in recent history.


Before Paul became only known as Cholly Knickerbocker, he wrote column with a few other pseudonyms.  He also wrote columns under the names Dolly Madison, Polly Stuyvesant, and Billy Benedick, but he was best known for his work as society editor for the New York American writing as Cholly Knickerbocker.  He spent endless hours writing slightly different columns for his various pseudonyms, but eventually convinced Hearst to give him a raise and subsequently focused on Cholly alone.

Maury Henry Biddle Paul was originally from Philadelphia, part of the Biddle family which was a prominent Philadelphia family much like the families he covered in his column in New York.  He often used this name connection to facilitate conversation at society events and parties.  He had an incredible memory and never forgot a face.  He knew all of the ins and outs of society and he knew how how to dine with the right people in order to ingratiate himself enough into society to get the information he needed for his columns.  He prided him on writing the truth and to this fact, was never once named in a libel suit.  Paul would never publish everything he knew about an individual because he wanted to withhold some information as leverage.  Once the Paul was well established as Cholly Knickerbocker, everyone knew that Paul and Knickerbocker were one and the same, but his identity was unknown when he began these columsn.  When William Randolph Hearst discovered the Dolly Madison column in the Evening Mail (a newspaper he did not own), he instructed his city editor to find and hire the writer.  They were both surprised to find out that Dolly was a man!

Paul, as Knickerbocker, had a sharp bite to much of his writing.  He added delicious tidbits to his columns about prominent society figures whether dead or alive.  In fact, he mentioned Ruth Mills several times after her death and even chastised a fellow journalist for being unaware of her death:

"It is...distressing to read in a great New York daily the misinformation that 'Mr. and Mrs. Ogden Mills are having their Bellevue Avenue villa made ready for their arrival, after an extended sojourn in Europe.  Mrs. Mills will entertain lavishly on her return to Newport.'  The ink slinger who wrote the above should be discharged immediately.  Even the most unimportant person knows that the great and mighty Mrs. Mills died many months ago."  The Gazette Times, July 31, 1921


Paul was certainly right in his disbelief, Ruth had died nearly eight months prior, and any journalist worth employing would have known about it.  He was not afraid to call attention to blunder in his column, which was an excellent segue into a report on the rest of the family.  Since Mrs. Mills had passed away, Mr. Mills decided not to go to Newport during the summer of 1921 and instead spent time with his daughter Beatrice, the Countess of Granard.  Paul surmised that Mr. Mills would not spend much time in Newport in the future because he preferred the quiet life he would find at Staatsburgh.

In an article written just three months later in September 1921, Paul reported on gossip that the Millses Newport home was about to be placed on the market.  We know that the family kept ownership of the home until the early 1930s, but  rumors abounded after Mrs. Mills passed away.  This bit of gossip gave Paul the opportunity to write about the social differences between Mrs. Mills and another member of high society, Mrs. Stuyvesant Fish, even though they had both passed away by 1921.  According to Paul, "Teenie" Mills presided over conservatives of society's smart set, while Mrs. Fish was the leader of the "circus set".  It is certainly a testament to the Mills' place in society that Cholly Knickbocker devoted so much time to them in his columns even after Ruth had passed away.

One of the techniques that Paul employed in his columns was referring to society figures by their first name or their pet name (or nickname).  Mrs. Grace Vanderbilt was "Mrs. Neily" or "Her Grace," Ruth Mills was "Teenie," and Mrs. Herman Oelrichs was "Tessie."  It gave the false impression that Paul was close friends with every one of them when, in fact, many were infuriated by his use of these names.  Alfred Gwynne Vanderbilt appealed to Paul to please stop calling him "Alfie."  This type of colloquial writing helped readers to feel part of the lives of the rich and famous, which was something that Paul knew most decidedly appealed to his readership.

Yet, Maury Paul was friends with some of the people who appeared in his columns and he always stuck up for his friends.  Society folks often asked him to announce an engagement or provided him with an exclusive story.  He spent time cultivating relationships with society leaders and became friends with many of them including Reginald Vanderbilt, which resulted in a Cholly Knickerbocker exclusive reporting the engagement between Reginald Vanderbilt and Gloria Morgan in 1923.  Paul was present at the engagement and the christening of their daughter, little Gloria Vanderbilt, whose eventual custody case dominated the media.  Paul was a staunch supporter of Gloria Morgan Vanderbilt and he clearly took her side against her sister-in-law Gertrude Vanderbilt Whitney when Whitney was trying to gain custody of little Gloria.

Paul reveled in being the first to announce important news and he was thrilled to be the first journalist to romantically link the future Edward VIII with Mrs. Wallis Simpson, who was then married.  Edward VIII would later abdicate his throne to marry the American divorcée.  Paul's columns regularly referred to Edward's romances as his "favorite dancing partners."  He reported on his dalliances with Thelma, Lady Furness, an American who was married to Marmaduke Furness, 1st Viscount Furness, and who was the twin sister of Gloria Morgan Vanderbilt.  As their relationship wound down, Paul was very eager to report on the Price of Wales' new "favorite dancing partner," Mrs. Ernest Simpson, and was very proud to have been the first reporter to do so.


Maury Paul is best remembered during his years as Cholly Knickbocker for coining the term "café-society."  When Paul was just getting started as a journalist, society was still led by women like Ruth Mills, Mamie Fish, and Grace Vanderbilt, but there was a new generation ready to do things a different way. Paul, himself, coined the term café-society, which references the time (primarily in the 1930s) when young members of elite society eschewed the staid social lives of their parents and went out to dance and drink in clubs.  Café-society was not about social advancement, it was about living life and having fun in the moment.  Gossip columns appealed to folks looking to relax and forget about the real world for a few moments so it was appealing to read about the activities of this set. This became even more true during the Depression when gossip columns provided some much needed escapism.  So today if we find ourselves flipping past a show like Entertainment Tonight or Access Hollywood on the television, or glancing at the tabloids in the supermarket line, we should give a passing thought to Maury, aka Cholly, their illustrious predecessor.

*For more information about Maury Paul read Champagne Cholly: The Life and Times of Maury Paul by Eve Brown, who worked as Paul's secretary.  After his death, she even took over the Cholly Knickerbocker column for a short while.