The tradition of gift giving at Christmas time dates back to the biblical story of the three wise men from the East who brought gifts of frankincense, gold, and myrrh to the newborn baby Jesus.  Christmas gift giving since then has become its own phenomenon and a huge commercial enterprise, but this has not been constant since biblical times.  Waxing and waning in different periods, gift giving became more popular during the Victorian era (1837-1901) and the tradition has continued to grow ever since.

There was a fear that the materialism of gift giving tarnished the holy day celebrating the birth of Jesus, but that idea did not temper the growth of Christmas gift giving.  While merchants in the 1820s-1840s began to notice an increasing number of gifts purchased in the Christmas season, it was not until later that shopkeepers adopted an approach that actively marketed holiday gift giving.  Yet compared to today, Christmas gifts were initially simple and often homemade items like cakes, clothes, and dolls.  Soon manufactured toys began flooding the market and gift giving gradually became more extravagant.  It has developed into an economic engine that drives advertising, marketing, and the economy for much longer than the month of December.

Speaking of extravagant gift giving, Darius Ogden (D.O.) Mills was known to give his two children $1 million each as a Christmas gift.  The gift of a single million would be extravagant today, but with inflation, D.O. Mills' gifts from the early part of the twentieth century would be currently worth approximately $25 million.  Gift giving habits of the upper class elite would not have normally been public knowledge, but in 1910 D.O. Mills passed away just nine days after Christmas.  This led to a situation wherein the State Controller tried to include the $2 million Christmas gifts as part of his estate and subject to an estate tax.  D.O.'s children, Ogden Mills and Elisabeth Mills Reid, objected and the matter went to court.  Finally, after an appeal, the courts decided in the favor of Ogden and his sister.  There was enough evidence to conclude that the gift was merely a Christmas gift and not made in anticipation of death.


Part of the decisive evidence was a letter written to Ogden from his father dated December 14, 1909 that stated D.O.'s intention to gift Ogden and his sister Elisabeth with $1,000,000 each as Christmas gifts.  He wrote,

My Dear Son:
I have been very much pleased to get your daily letters, and I hope you will understand that my hand does not permit writing yet except a poor signature.

I want to give you and your sister for your Christmas present $1,000,000 each.  I think perhaps the best way to do it is to give you each 8,000 shares of Atchison, making up any difference by cheque.

When you come out I think you had better bring this stock with you for my signature, so that you names can be carried on in the regular way in the Atchison books.

I am making to each one of the children my usual Christmas gift of $600 as a kind remembrance.

Give all the people in the office the same sums for Christmas as usual.  Also send out Christmas charity cheques as last year.


On December 24, 1909, D.O. Mills wrote to his bookkeeper that he should "Credit Ogden Mills and Mrs. Elizabeth Reid each with $1,000,000.  Charge my account with that practically the same as last year." (New York Times, August 12, 1915, p.9).  It is unknown how many years D.O. gave his children a $1 million Christmas gift, but one newspaper reported that it had been the custom for over five years.  The paper also does not specify who the children are that received a $600 gift, but one can assume D.O. was referring to his grandchildren.

With the exception of the Gilded Age elite, most Americans were not receiving a million dollars in stock as a Christmas present.  A list of the most popular presents requested by kids writing Dear Santa letters to newspapers in 1913 reveal a desire for toys like dolls, rocking horses, trains, and skates, but also for items we would take for granted today such as candy, nuts, oranges, and handkerchiefs.  In fact candy and nuts were the top two most requested gifts.  The Mills children and others of their class would not have been writing Dear Santa letters to the newspaper, but certainly this list is comparable to items the servants would have requested as children.


Christmas was also a time for giving gifts to the less fortunate and making donations to charity.   D.O. Mills always made sure to give contributions to many charitable causes at Christmastime.  Wealthy Gilded Age elite always presented staff members with a gift.  Edith Vanderbilt, wife of George Vanderbilt and hostess at the Biltmore estate, always made sure that the child of every estate employee received a gift.  The Biltmore archives reveal extensive notes that Edith kept to ensure that each child did not receive the same thing they had in past years.  Receipts from FAO Schwarz list the countless toys and games she purchased for the children.  The Cecil family, descendants of George and Edith Vanderbilt, and current owners of the Biltmore, have continued this tradition.  They present over 1,000 gifts for children at the employee Christmas party each year.

Though gift giving can reveal an underlying societal materialism, it can also be seen as a way to demonstrate communal bonds and familial ties.  Gifts symbolized the connection between individuals and the strength of families, which was especially important during times of social upheaval.  During the Gilded Age, families who were not society's elite felt that upheaval most strongly, both socially and economically.  Gift giving was often used as a way to feel connected and secure in relationships.  As early as 1856, Harper's Magazine proclaimed, "Love is the moral of Christmas...What are gifts but the proof and signs of love!"

We wish you and yours love this Christmas whether or not gifts are involved! 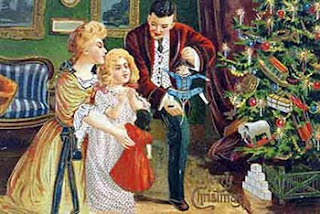