Changing of the Guard:
Who Will Become the Next Queen of Gilded Age Society...?

Caroline Schermerhorn Astor (1830-1908) was undeniably the grande-dame of society for decades.  She reigned over New York Society and the "Four Hundred," as the arbiter of good taste and social acceptance.  By the 1890's, however, she was beginning to slow down.  Her husband, William Backhouse Astor, died in 1892 and her daughter Helen (Roosevelt) died in 1893, which necessitated two years of mourning in a row.  In 1895, Mrs. Astor's entertaining co-conspirator, Ward McAllister, died as well really leaving her without the same gusto for entertaining.  She also was reportedly suffering from dementia, which affected the later years of her life.  Once she was advancing in age and starting to slow down, society was buzzing about who would become the next Mrs. Astor.


There were several candidates, but who had the strength, power, and skill to succeed?  Who had the combination of wealth, elegance, beauty, and needed to take over the reigns and lead society?  Let's take a look at the contenders... 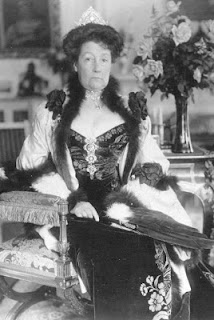 Husband: Stuyvesant Fish, President of the Illinois Central Railroad, m.1876
Worth: As she described it, Just a few million...
Homes: 78th Street & Madison Ave (New York), Glenclyffe in Garrison, NY (Hudson Valley Country Home), Crossways (Newport)
Attributes: She had a powerful intellect and a quick wit that drew many people to her.  She was an excellent hostess because she wanted to show her guests a good time above all else.  She had fun!  Her disregard for certain stodgy social customs and frequent absence of tact showed a fearlessness that many respected.
Weaknesses: Her antics were perhaps too over the top for many in society, and she was always admittedly derisive of society's rules.  She refused to follow the traditional playbook!  She never tried to be polite and it eventually became a badge of honor to be insulted by Mrs. Fish. 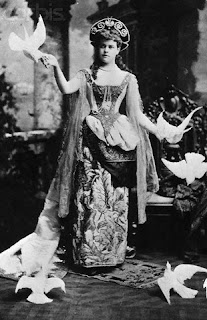 Husband(s): William Kissam Vanderbilt, m.1875  divorced.1895; Oliver Belmont, m.1896
Worth: William Vanderbilt received $50 million when his father died in 1885, and Alva received over $10 million in the divorce as well as several estates including Marble House.  When Oliver Belmont died in 1908 he left an estate of around $5 million.
Homes: 660 Fifth Avenue (New York), Marble House (Newport), Belcourt (Newport)
Attributes: Alva was strong willed and brazen.  With her famous fancy ball in 1883 (see above photo), she gained acceptance by Mrs. Astor and made it into society.  In addition, her daughter married the Duke of Marlborough in 1895, which brought more prestige to her family and drew attention away from her divorce.
Weaknesses: Alva was one of the first women of her class to divorce.  This caused a minor scandal, and she married her second husband less than a year later.  After her second husband died, she no longer cared much for society.  She became very involved with the suffrage movement and directed all of her energy towards that cause. 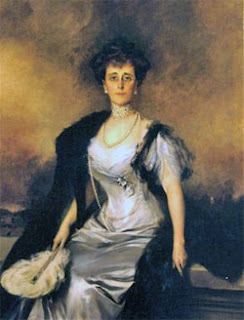 Husband: Ogden Mills, financier, m.1882
Worth: When he died, the Ogden Mills estate was valued at $40 million.
Homes: 2 East 69th Street (New York), 73 Rue de Varennes (Paris), Ocean View (Newport), Millbrae (California), Staatsburgh (Hudson Valley Country Home)
Attributes: Ruth was a member of the prestigious Livingston family and always touted her illustrious Knickerbocker ancestors. She was known to be so well organized and staffed that she could have given a dinner for 100 without calling in outside help.  Her taste was considered by others to be always elegant and refined.
Weakness : There were reports that Ruth was snooty and too exclusive.  Some said that she felt there were only 20 good families in all of society.  She may have been too exclusive to garner enough support from all of high society. 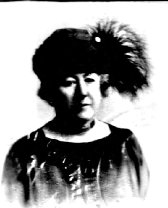 Husband: Ogden Goelet, He had the second largest real estate holdings in Manhattan. m.1877
Worth: $30 million when they married, $65 million at his death in 1897
Homes: Ochre Court (Newport), 608 5th Avenue (New York), Wimborne House (London)
Attributes:  She successfully married her daughter, May, to the Duke of Roxburghe.  Mary's entertaining was lavish, but tasteful and she became known for the beautiful floral arrangements adorning her home.
Weaknesses:   Her sister was Grace Wilson Vanderbilt and they were known as "the marrying Wilsons" because each child married into a wealthier and more socially prominent family (her brother married Carrie Astor, the Mrs Astor's daughter).  Their father, Richard Wilson, had a fortune of $10 million, but was considered a profiteer.  It was rumored that he made his fortune by selling cheap  and the family was viewed with some suspicion by many in high society.  Many say that Margaret Mitchell modeled Rhett Butler after Richard Wilson in her famous novel Gone With the Wind. 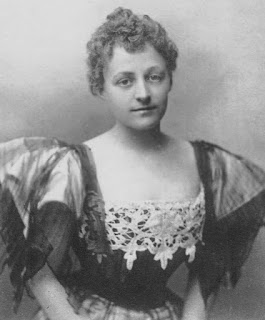 Husband: Cornelius "Neily" Vanderbilt III (Eldest son of Cornelius II) m.1896 (they eloped and the marriage was not accepted by Cornelius's family!)
Worth: At the time of his father's death Cornelius received only $500,000 and the income from a $1 million trust, while his younger brother Alfred received the bulk of the estate, over $42 million.  Cornelius later received $6 million from his brother Alfred as a gesture of goodwill after he was essentially left out of his father's will.
Homes: 640 Fifth Avenue (New York), Beaulieu (Newport)
Attributes: Grace was the youngest of the contenders and therefore had long staying power.  She was known far and wide for her beauty and sophistication.
Weakness:  Grace was also secretly engaged to Neily's older brother William at the time of his untimely death in 1892, which did not endear her to the rest of the Vanderbilt family.  After Cornelius III also became enamored and eventually eloped with the Southern beauty, his father cut him out of his will and he only received a small portion of the funds as a kind gesture from his younger brother Alfred.  These funds were not nearly enough to truly keep up with the wealthiest in society.  Grace continued entertaining into the 1940's, but their funds consistently dwindled and she overspent her means.

Answer: No one woman!  Without Mrs. Astor as a single focal point for society, many overlapping cliques dominated society and no one woman became "queen."  Additionally, society was changing and by the time that Mrs. Astor died, the masses were unwilling to have one woman dictate who was in and who was out.  Many large fortunes were made in the Gilded Age and many families tried to buy their way into society.  They may have had money, but Mrs. Astor considered many of them to be uncouth and unable to properly behave in society.  Mrs. Astor and her crowd behaved in a stately and proper way befitting of the upper class.  Many of these new millionaires threw their money around and held parties that were increasingly over the top and gaudy.  Even the Vanderbilts were originally excluded from high society, but they(mainly Alva) fought their way in after throwing her infamous ball in 1883 which Mrs. Astor grudgingly attended and the press deemed elegant.  Of course, not everyone could buy their way into society and there was often some push-back for over the top entertaining (see the Bradley-Martin Ball), but soon the lines between old money and new money blurred.  Society was more inclusive and money may not buy manners, but by the 20th century, it could determine entrance into upper class society.

Shortly before her death, Mrs. Astor reflected on what would transpire once she was gone.  She said, "I am not vain enough to believe that New York will not be able to get along without me.  Many women will rise up to fill my place.  But I hope that my influence will will be felt in one thing, and this is, in discountenancing the undignified methods employed by certain New York women to attract a following.  They have given entertainments that belonged under a circus tent rather than in a gentlewomen's home." (Chicago Record Herald, September 15, 1908)  Whether or not Mrs. Astor approved, society did move forward in her absence, but certainly not always in a way that would have garnered the approval of the Mrs. Astor.