This essay is the third in a four part series about Hallowe'en during the time of World War I and the Spanish flu pandemic. The series was written by Carol Kohan who is one of Staatsburgh's wonderful volunteers. In addition, Carol enjoyed a 38 year career with the National Park Service, holding interpretation, curatorial, and management positions including Curator of Martin Van Buren National Historic Site in Kinderhook, Midwest Regional Curator in Omaha, Superintendent of Herbert Hoover National Historic Site in Iowa, and Deputy Superintendent of Roosevelt-Vanderbilt National Historic Site in Hyde Park. After her retirement from the National Park Service in 2013, Carol served two terms as Historian for the Town of Hyde Park.

Part III: Hallowe’en in War and Epidemic--1918
In Part II, we learned that wartime posed a serious but manageable challenge to Halloween. Americans and their beloved Halloween tradition faced the war with a unified message: Not only was it acceptable to observe the holiday, its celebration was encouraged as a jolly and patriotic antidote to the drudgery and anxiety of wartime-- as long as everyone was mindful not to waste foodstuffs or destroy property, and remember those in service to the nation.
During the 1918 Halloween season, the Food Administration’s appeal for conservation was more urgent:

Corn, beans, peas, apples, pumpkins, etc., should not be used… Every year thousands of pumpkins are cut up and wasted in making Jack-o-lanterns. The same wasteful practice has applied to apples in the time-honored sport of of ‘bobbing for apples.’ It is not the purpose of the food administrator to discourage harmless little celebrations in the home, but this year it is imperative that every scrap of food be saved. (The News- Herald Franklin, PA 29 Oct 1918)

There was also now a critical shortage of sugar. Ration guidelines of “2 lbs. per person per month” were issued on a voluntary basis for consumers while candy makers and other businesses were required to cut back as much as 50% on their sugar consumption. The Government also asked that customers buy only 1 pound of candy at a time. Loft’s Halloween candy mixture would rise to 49 cents a pound up from 34 cents the year before.

New York importer B. Shackman advertised that “in spite of all difficulties” interesting novelties were available for the Halloween party and supper table. Loft also offered their usual pumpkin head lanterns but the war prices had kicked in—nearly double what they were in 1917.

Spirits could be kept up with modest Halloween celebrations although there would be no Bogie Book for inspiration this year. The Dennison Manufacturing Company was now focused on the war effort by making “Essential War-Time Industry” products including gas mask repair kits, identification tags and labels for bombs and ammunition, crepe antiseptic bandages, surgical pads, and crepe paper pneumonia gowns. (Dennison Manufacturing Company Archives Finding Aid, Framingham History Center)

Pneumonia gowns? Yes, a new inscrutable enemy was on the attack over there and at home. The influenza, erroneously dubbed the “Spanish flu,” posed a lethal threat unlike anything the world had seen since the bubonic plague of the Dark Ages.

The origin of this flu is still unknown, but it was not Spain. Unlike the combatant countries which had imposed strict censorship to restrict information considered harmful to their war efforts and morale, neutral Spain had no such limitations. The Spanish press freely published reports of the flu, thus the rest of the world found a scapegoat there.

In fact, it is now believed that the flu pandemic likely started right here in the USA! In January 1918, some cases of an unusual flu appeared in Haskell County, Kansas. By the end of March, more than 1000 soldiers at Camp Funston, Kansas had been infected and 38 had died. From Funston, it spread to other camps, to the surrounding civilian populations, and overseas as the troops were deployed.

By September, the flu had mutated into a deadlier strain and a “second wave” washed through the country. October would be the deadliest month on record with 195,000 American lives lost.

Considering the earlier flu outbreak and that a quarantine was currently in effect, this Halloween postcard addressed to a soldier in Camp Funston is chilling. 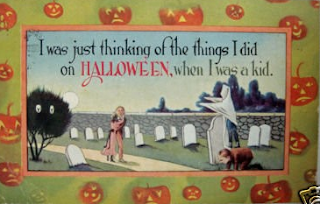 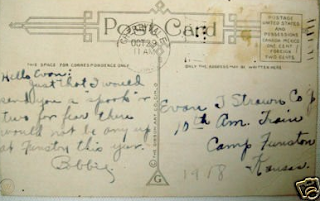 1918 Halloween postcard, Worthpoint
“Just thot (sic) I would send you a ‘spook’” or two for fear there would not be any up at Funston this year.”

Whereas the war was met with a unified national strategy, the flu epidemic in the US was received with denial, confusion and misunderstanding by some; sobriety, caution and defensive measures by others. Halloween was caught in the middle! 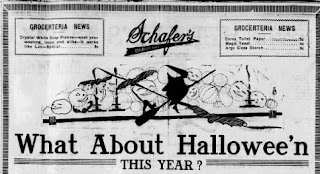 Ultimately, the holiday would be observed, or not, according to the situation in each community. Where outbreaks were severe, or officials were prudent, Halloween celebrations were curtailed or cancelled altogether.
Binghamton, NY had just ended their quarantine and shut-down of theaters and public entertainment when the newspaper reported “there will not be as many indoor Halloween celebrations …but the youth of Binghamton and of America probably will find diversion in the building of bonfires, throwing of apple peels, burning of nuts, bobbing for apples , and other traditional manifestations of Hallowe’en ideas.”

Wanamaker’s store in Philadelphia optimistically declared “Halloween will be a Big Time This Year… Celebrated in the big outdoors—where we can have the best and healthiest times anyway!”

Outdoors celebrations might be more healthful but congregating in crowds certainly was not! Despite the fact that Philadelphia was overrun with the flu (exacerbated by a Liberty Loan parade in September), the city prepared for a public Halloween celebration with thousands of masqueraders “to rout the gloom.” This was not a wise decision, as by the epidemic’s end, Philadelphia would have the highest death rate of all cities in the US.

On the other hand, Harrisburg, PA prohibited celebrations recognizing it was “no time for revelry.” Likewise, the Burgess of the Town of Latrobe forbade “all “Hallowe’ening,” upon the part of the boys; together with all masquerading, all visiting from house to house by mummers, and all other forms of Hallowe’en observance which, if permitted, might be the means of spreading the disease.” (Latrobe Bulletin, Latrobe, PA, 29 Oct 1918).

Fortunately, the flu was less severe in New York City. There were no large public celebrations, however, small Halloween parties could be held, especially with soldiers as welcomed guests if they could get leave from camp.

The flu first made its appearance in Poughkeepsie in September. On October 11, the Poughkeepsie Eagle-News reported, “Flu still holds city in its grip” and they mentioned that a third emergency hospital would be set up. A few days later, a “National Campaign against Influenza” was mobilized by the US public health service in cooperation with state and local health authorities. Even so, Poughkeepsie’s mayor owned that “public health was in the keeping of the good sense of the citizens.”

By October 31, Poughkeepsie theaters and public entertainment were shut down, but that didn’t mean the end of Halloween. Luckey, Platt & Co suggested everyone “Keep cheerful during the epidemic by entertaining yourself at home.” Purchasing the latest Victrola records, books and magazines, and having a “jolly little party” with all the trimmings would help to make this a “good old-fashioned Hallowe’en night” while being considerate of others.

Since there was no official ban on masquerading in Poughkeepsie,

…parties of fantastically gowned children, carrying Jack O’ lanterns and wearing false faces paraded the streets and called upon their friends… in spite of the pall of sorrow and sickness that hangs over the city found a number of interesting things to do by the way of observation of Hallowe’en and, even though the old ways of “celebrating” were frowned upon, enjoyed the evening in a quiet manner. (Poughkeepsie Eagle-News, 1 Nov 1918)

“Celebrating” and “quiet” were implicit references to pranks. Pranks were discouraged during the war as disrespectful, wasteful and unpatriotic. In 1918, District Food Administrators issued new rulings banning the “indiscriminate throwing of cabbages and other fruit, even if it is over-ripe…and the use of flour in making up as ‘ghosts.’” (Washington Times, D.C., 31 Oct 1918)

If pleas to parents to keep the children inside and official proclamations were not heeded, the consequences could be police arrests for property damage or rowdyism.

Restrictions were received with complaints in some quarters. Back in Kansas, one article railed against the ban on pranks and parties, “vanishing joys” of this “Halloweenless Halloween.”

An article in a Pennsylvania newspaper concluded: “One can put on a ‘flu’ mask and a bathrobe, imagine participation in a masked ball and, as a diversion, pop a dishful of corn in one’s own kitchen. That is about the only way one can safely celebrate Halloween this year, according to the regulations of the Health Board.” (The News-Herald, Franklin, PA, 29 Oct 1918 )

Well, only if one lacks imagination. Most people figured out ways to have a fun Halloween, restrictions notwithstanding.

Yes, there will be Halloween parties…Pumpkins, Black Cats and Other Weird Things Will Be There Just the Same… Homes are going to be decorated; children are going to sit around and play Halloween games; fathers and mothers are going to get better acquainted with their youngsters and relate stories of ghosts and goblins. There will be heaps and heaps of fun even if the parties are restricted to family affairs.

The city’s merchants echoed this confidence:

…the sale of pumpkin lanterns for kids is just the same this year as in former years. We have had a big sale on Greetings and all other Halloween goods with the exception of favors …on account of the ban on big functions, but from our sales it looks as if there will be some good old-fashioned family Halloween parties. (Spokane Chronicle, WA, 30 Oct 1918)

Writing for the Indianapolis Star, perhaps Florence Webster Long said it best, invoking the everlasting spirt of the Halloween festival:

However you can’t quarantine witches and goblins and elves, and no one would be surprised to see a black-robed figure come riding though space on a broomstick…Bonbons (with apologies to Mr. Hoover) are bound to taste better if served as pumpkins or witches’ cauldrons…The ghostly figures and corn husks and the brilliant yellow and black festoons sacred to the Halloween season have lost none of their charm, for the spirit of Halloween lives always in the imagination of a mystery loving people. Even it if be only a family party which bobs for apples, searches the mirror at midnight for some token or listens for mysterious prophecies at the appointed hour, it’s the story of Halloween which invests it with all its charm, and this will live through all time. (Indianapolis Star, 27 Oct 1918)